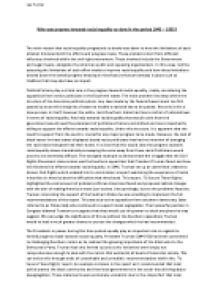 ﻿Lee Turner Why was progress towards racial equality so slow in the period 1945 ? 1955? The main reason that racial equality progressed so slowly was down to how the limitations of each attempt hindered both the efforts and progress made. These problems stem from different influences involved within the civil rights movement. Those involved include the Government and Legal means, alongside the American public and opposing organisations. In this essay I will be assessing the limitations of each effort made to improve racial equality and how these limitations slowed down the overall progress keeping in mind factors that are already in place such as tradition that may also have an impact. Political factors play a critical role in the progress towards racial equality, mainly considering the opposition from senior politicians in the Southern states. The main problem lies deep within the structure of the American political system. Any laws made by the federal Government are first passed by a two third majority of states to enable a national law to be passed. Not only is this a slow process in itself, however the white, racist Southern states had more control of national laws in terms of racial equality. Any help towards racial equality that would come from the government would need the placement of politicians that are committed and more importantly willing to support the efforts towards racial equality. ...read more.

unfair, they had to be brought through courts of appeal and due to racism in the courts, the cases were usually taken to the Supreme Court. This had a crucial influence on the progress towards racial equality as this process was a long and arduous. The ?Brown v. Board of Education of Topeka? case in 1954 and the following case in 1955 highlight the multiple problems faced by organisations and also support the conclusion that the limitations outweigh the success from the trial. The case delt with younger school children such as Linda Brown who was forced to go to an all-black school located 20 blocks away from her home. Her father argued that this is unacceptable and that she would be better off attending the local white school, which was closer to their home. The NAACP had taken the case, once again, to the Supreme Court and the Court unanimously decided that segregation was illegal in American schools. Although the Court?s decision was seen as a turning point in the civil rights struggle, the problems that the case highlighted may be of more importance. The first problem highlighted is that the Case lasted three years from start to finish and therefore suggested that legal methods of campaigning in general were relatively slow. The second problem we come across through the ?Board of Education? cases is shown simply through the need of a second case and the reason it was held. ...read more.

This shows that the progress towards racial equality was slow as almost a year after the court case and even after the following campaign, the interstate busses still remained segregated in areas of the southern states. There were several prominent civil rights groups active during this period aiding the same cause of racial equality however they all differ on issues of method and calmative leadership at a national level didn?t exist. I believe that this also contributed to the lack in progress towards racial equality. To conclude, the main reason that progress towards racial equality was so slow through this period is because the rulings such as Morgan V. Virgina, Sweatt V. Painter and Brown V. Board of Education all showed that segregation was unconstitutional and success of winning these cases are somewhat hindered by the fact that the de jure victories were so slow to produce de facto change. Examples have shown that when these problems are highlighted, they are not enforced with urgency due to the fact that the authorities enforcing these laws do not believe in the rulings themselves. This then leads on to the development and presence of organisations such as the White Citizen?s council and the Ku Klux Klan that increased fear within the African American community. Fear of prosecution slowed down not only the participants in the cause of racial equality but also willingness to enforce any legal action in favour or aiding the civil rights movement. ...read more.