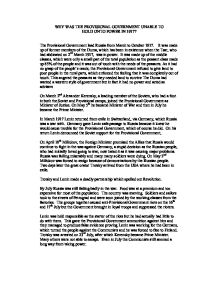 Why Was the Provisional Government Unable To hold onto power in 1917?

WHY WAS THE PROVISIONAL GOVERNMENT UNABLE TO HOLD ONTO POWER IN 1917? The Provisional Government lead Russia from March to October 1917. It was made up of former members of the Duma, which has been in existence when the Tsar, who had abdicated on 2nd March 1917, was in power. It was made up of the middle classes, which were only a small part of the total population as the peasant class made up 85% of the people and it was out of touch with the needs of the peasants. As it had no grasp of the people's needs, the Provisional Government refused to give land to poor people in the rural parts, which enforced the feeling that it was completely out of touch. This angered the peasants as they needed land to survive The Duma had wanted a western style of government but in fact it had no power and acted as advisers On March 2nd Alexander Kerensky, a leading member of the Soviets, who had a foot in both the Soviet and Provisional camps, joined the Provisional Government as Minister of Justice. ...read more.

Food was at a premium and too expensive for most of the population. The country was starving. Soldiers and sailors took to the streets of Petrograd and were soon joined by the working classes from the factories. The groups together caused anti-Provisional Government riots on the 16th and 17th July but the Government brought in loyal troops and suppressed the rioters. Lenin was held responsible as the starter of the riots but he had actually had little to do with them. This gave the Provisional Government ammunition against him and they managed to produce false evidence proving Lenin was working for the Germans, which turned the people against the Communists and he was forced to flee to Finland. Trotsky was arrested on 23rd July, after which Kerensky became Prime Minister. Many others were not able to escape. Even in July the Communists still seemed a long way from taking power. Between 27th August and 1st September General Kornilov, commander of the Russian Army attempted to set up a military dictatorship to deal harshly with the Communists because he felt the Provisional Government was not firm enough. ...read more.

Kerensky had lost a lot of support and was losing his power, while Lenin, even in exile, was gaining support. Four days after the Bolsheviks achieved their majority, Trotsky was released from prison and was again free to speak his mind and spread his Communist manifesto. He became Chairman of the Petrograd Soviet. .On 3rd September, Trotsky organised a Revolutionary Committee. By 20th October the Revolutionary Committee had begun preparations for the revolution. The Revolution was made possible because the Petrograd Soviet had supporters in the Railway Service and thus could stop the trains, which were the only source of long range transport. They also had supporters in the banks and could thus stop money flowing. As well as containing the workers, the soldiers and the sailors, the Committee all to strike at the same time with the Communists controlling all the major train stations and key points around Petrograd. A Bolshevik controlled cruiser sailed up the River Neva and fired a shell into the Winter Palace to signal the start of the revolution and Petrograd quickly came under Bolshevik rule. After a few days of fighting, Moscow also fell to the Bolsheviks. ...read more.