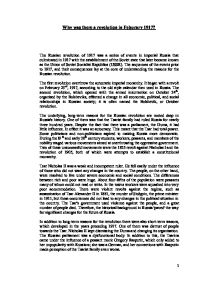 Why was there a revolution in Feburary 1917?

Why was there a revolution in Feburary 1917? The Russian revolution of 1917 was a series of events in imperial Russia that culminated in 1917 with the establishment of the Soviet state that later became known as the Union of Soviet Socialist Republics (USSR). The sequences of the events prior to 1917, and their consequences lay at the core of understanding the reasons for the Russian revolution. The first revolution overthrew the autocratic imperial monarchy. It began with a revolt on February 23rd, 1917, according to the old style calendar then used in Russia. The second revolution, which opened with the armed insurrection on October 24th, organised by the Bolsheviks, effected a change in all economic, political, and social relationships in Russian society; it is often named the Bolshevik, or October revolution. The underlying, long-term reasons for the Russian revolution are rooted deep in Russia's history. One of them was that the Tsarist family had ruled Russia for nearly three hundred years. Despite the fact that there was a parliament, the Duma, it had little influence. In effect it was an autocracy. This meant that the Tsar had total power. Some politicians and non-politicians aspired to making Russia more democratic. ...read more.

(1) The tiny spark that started a blaze of public disorder occurred when an angry old woman threw a stone and broke a baker's shop window. Others joined in, and the next day more shops were stoned and looted. On February 26th Nicholas II dissolved the Duma; the deputies accepted the decree but reassembled privately and elected a provisional committee of the State of Duma to act in its place. On February 27th the revolutionary mood triumphed. Regiment after regiment of the Petrograd garrison went over to the people. Within 24 hours the entire garrison, approximately 150,000 men, joined the revolution, and the united workers and soldiers took control of the capital. The uprising claimed about 1500 victims. On February 27th the provisional committee of the Duma announced that it would handle restoration of order, and on February 28th it placed its commissars in charge of the ministries. The provisional committee formed the Provisional Government and demanded the abdication of the Tsar. The provisional Government faced an appallingly difficult task. In the midst of war and threatening economic collapse and social anarchy, it had somehow to establish itself as the legitimate government. Advised by his generals that he lacked the support of the country, Nicholas II informed the delegates on March 2nd that he was abdicating in favour of his brother, Grand Duke Michael. ...read more.

On the night of 25th October 1917 the Bolsheviks seized control of the Winter Palace in Petrograd almost without firing a shot. The authority of the government had virtually collapsed for some weeks before the Bolsheviks seized the Winter Palace with a relatively insignificant group of ill-armed Red Guards. These led to the establishment of the Bolsheviks Party as the ruling power. For many in the Soviet Union and around the world, the Revolution was an attempt to create a better society, which went dreadfully and cruelly wrong. But for many, including the last leader of the Communist Party Mikhail Gorbachev, the ideals rather than the reality had a profound and lasting influence. The impact of the Russian revolution on 20th century history has been profound. Many historians see it as probably the defining event of the century. BLIOGRAPHY CARR, E. H. - A History of Soviet Russia, (Macmilan) CARR, E. H. - The Bolshvik Revolution, 1917-23, Vol. 2 (Pelican, 1966) HOSKING, G. - A History of the Soviet Union, (Fontanna/Collins, 1985) McAULEY, M. - The Soviet Union since Ninteen Seventeen (Longmans, 1981) NOVE, A. - An Economic History of the U.S.S.R. (Penguin, 1989) Quotes (1) Collection of posters on Russian Revolutionary postcards, private collection. (2) BBC Library Archives. (3) Collection of posters on Russian Revolutionary postcards, private collection. Other Sources Internet sites: - www.thehistorychannel.co.uk/classroom/alevell/revol.htm - www.barnsdle.demon.co.uk/russ/rusrev.html - www.barnsdle.demon.co.uk/russ/datesr.html - www.onwar.com/aced/data/romeo/russia1917feb.htm 1 1 ...read more.