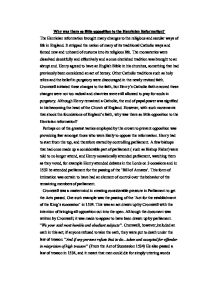 Why was there so little opposition to the Henrician Reformation?

Why was there so little opposition to the Henrician Reformation? The Henrician reformation brought many changes to the religious and secular ways of life in England. It stripped the nation of many of its traditional Catholic ways and forced new and unheard of customs into its religious life. The monasteries were dissolved deceitfully and effectively and a once cherished tradition was brought to an abrupt end. Henry agreed to have an English Bible in his churches, something that had previously been considered an act of heresy. Other Catholic traditions such as holy relics and the belief in purgatory were discouraged in the newly revised faith. Cromwell initiated these changes to the faith, but Henry's Catholic faith ensured these changes were not too radical and chantries were still allowed to pray for souls in purgatory. Although Henry remained a Catholic, the end of papal power was signified in his becoming the head of the Church of England. However, with such movements that shook the foundations of England's faith, why was there so little opposition to the Henrician reformation? Perhaps on of the greatest tactics employed by the crown to prevent opposition was provoking fear amongst those who were likely to oppose the reformation. Henry had to start from the top, and therefore started by controlling parliament. A few bishops that had once made up a considerable part of parliament ( such as Bishop Fisher) ...read more.

For example, the 'Glass of truth' was published in which Henry (partly with his own hand) wrote a clear and short version of the law of Leviticus that he argued required him to divorce Catherine of Aragon. The government also prefaced all its new statutes with propagandist material before they were distributed throughout the country. However, it is difficult to determine just how much effect propaganda had upon the people, as a great majority of them were illiterate. This problem of illiteracy was why the pulpit was used as a major force of propaganda. Priests were told to preach sermons in support of the Royal Supremacy, and as the people listening wanted to believe everything their priest told them, they soon accepted the new ideas. Many of Henry's critics did not share the same views in their opposition to the reformation. They all came from different backgrounds and therefore had different reasons for opposing. Some protested against the divorce, some with the dissolution of the monasteries, some against the changes to doctrine and some against the break with Rome. A.G. Dickens said that there was "No one organized group, there was no leader....and it seemed to have very different objectives". The Pope gave no lead to English Catholics to encourage them to oppose or rebel against the reformation. ...read more.

as many of the fundamental aspects of people's remained unchanged during the 1530's; such as their lifestyle and to some extent the doctrine remained mainly Catholic e.g. belief in transubstantiation). It was also far from clear what the end result would be of the Reformation. Even those few in touch with the events of the reformation had little idea that the changes would finally produce reformist ideas. Some people however welcomed the reformation and Protestantism, especially in court in the forms of Cromwell, Anne Boleyn and Cramner. Consequently, it can be understood why there was little cause for opposition to the reformation, when it caused little disruption and for many brought benefits to some people. Therefore it seems that a combination of tactics meant there was little opposition to the Henrician Reformation. Cromwell was an essential catalyst in making the reformation work; without his level of intelligence and ability to manipulate the reformation quite possibly may have encountered a great deal of opposition. The piecemeal and indeed relatively peaceful way in which the reformation occurred meant that people were rarely shocked by sudden change and that many would remain ignorant or unaffected by the changes that did occur. A lesser monarch might have been engulfed by the challenges such as the Pilgrimage of Grace, yet Henry and Cromwell remained consistent, and with an element of luck about the time that the changed were introduced, the Henrician reformation was successful and faced surprisingly little opposition. ...read more.