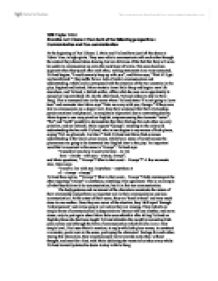 Communication and Non-communication in Act 2 Scene 2 of Brian Friel's &quot;Translations&quot;

Will Taylor 12G1 Examine Act 2 Scene 2 from both of the following perspectives : Communication and Non-communication At the beginning of Act 2 Scene 2, Maire and Yolland have just left the dance at Tobair Vree, in high spirits. They were able to communicate with each other through the contact they shared when dancing, but are oblivious of the fact that they will soon be unable to communicate on even the most basic of levels. This soon becomes apparent when they speak after each other, making statements in no way connected. Yolland begins, "I could scarcely keep up with you", and Maire says, "Wait till I get my breath back." They suffer from a lack of verbal communication and understanding, which can be juxtaposed with the situation of the two countries in the play, England and Ireland. Maire wants to leave Baile Beag and begin a new life elsewhere, and Yolland, a British soldier, offers what she sees as an opportunity to escape her impoverished life. ...read more.

An important word that is recurrent in the scene is "always". Yolland says: "I would tell you how I want to be here - to live here - always - with you - always, always", and Maire questions, "'Always'? What is that word - 'always'?" A few moments later, Maire says: "I want to live with you I anywhere - anywhere at all - always - always." Yolland then replies, "'Always'? What is that word - 'always'? Both misinterpret the other repeating "always" in confusion, mistaking it for agreement. This is an example of what they believe to be communication, but is in fact non-communication. The body gestures and movement of the characters accentuate the nature of their relationship and perform an important role in their communication and non-communication. At the outset of their scene, they are 'hand-in-hand' and very much close to one another. Once they are aware of the situation, they 'drift apart' through 'embarassment' and realise people will notice they are missing. ...read more.

My feet are soaking" "Your feet must be wet. The grass is soaking" To the audience, a line such as this would be humorous, which underlies the serious theme of the play throughout. Another humorous misunderstanding is when Maire says, "Don't stop - I know what you're saying." In reality, she has no idea of what he is trying to say, and in fact she believes the opposite of what he says. One form of communication that the characters try to adopt is sound, and Yolland is said to be "searching for a sound she might respond to". On the whole, the scene portrays two very much confused lovers. They are unable to verbally communicate, and the reality is that if they were able to verbally communicate, their relationship would not last because although they believe the other wants the same as them it is not the case. This relates to the non-communication between the English and Irish, and if they could communicate there would be much more co-operation between the parties. ...read more.