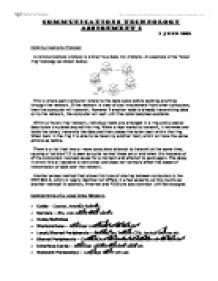 Communications Technology Assignment 2 5 June 2003 Communications Protocol A communications protocol is similar to a data link protocol. An example is the 'token ring' topology as shown below; This is where each computer listens to the data cable before sending anything through the network. If the network is clear of any involvement from other computers, then the computer will transmit. However if another node is already transmitting data on to the network, the computer will wait until the cable becomes available. Within a 'token ring' network, individual hosts are arranged in a ring and a special data token circulates around this ring. When a host wants to transmit, it retrieves and holds the token, transmits the data and then places the token back within the ring. When back in the ring it is able to be taken by another host, which will take the same actions as before. There is a risk that two or more computers attempt to transmit at the same time, causing a 'collision'! It is seen as quite normal these occur and when this happens all of the computers involved pause for a moment and attempt to send again. The delay in which this all happens is very small and does not normally affect the speed of transmission of data over the network. Another access method that allows this type of sharing between computers is the IEEE 802.5, which is nearly identical but differs in a few aspects, so this counts as another method! ...read more.

This layer is responsible for transferring frames from one computer to another. After sending a frame, it waits for an acknowledgment from the receiving computer. � The Physical layer transmits bits from one computer to another and regulates the transmission of a stream of bits over a physical medium. This layer defines how the cable is attached to the network adapter (Coaxial etc.) and what transmission technique is used to send data over the cable. Data going to and from the network is passed layer to layer. Each layer is able to communicate with the layer immediately above it and the layer immediately below it. This way, each layer is written as an efficient, streamlined software component. When a layer receives a packet of information, it checks the destination address, and if its own address is not there, it passes the packet to the next layer. Communication Channels A communication channel refers to the various methods that a particular media can be used for. In this case it is the different methods in which the internet can be used for. The communication channel is a crucial part of the communication network. Internet Applications A complete set of application layer programs are available for use on the internet. These can be using internet technology or be internet applications directly, like a browser. However, each application program type is associated with its own application 'protocol'. The application layer is just another protocol layer in the OSI model, the programs interface with application layer protocols. ...read more.

These could be files or devices, like CD drives and hard disks. They are configured so that they are shared resources and that they can be accessed from any other PC that might be connected to the P2P. Instead of network information being kept on one machine, like client server networks, the information and resources are stored across the entire P2P network. This information is stored on the users own hard disk and shared to any other machine on the network. This means that each PC acts as both a client and a server. Each PC can communicate directly with each other and share each others resources. Main Differences; 1. Network access speeds in client servers are usually faster than those found on P2P. 2. Client servers can support vast numbers of PC's, as a result of the architecture. 3. P2P clients can communicate directly to each other. 4. Client server networks can be monitored through one machine, the file server. 5. In a P2P network each PC can make backups for security purposes. 6. The file server on the Client server can improve efficiency and can easily update software on one machine instead of 'x' amount of PC's. 7. If a client PC wants to communicate directly with another client PC, it will have to be routed through the file server, which is not as efficient as a direct connection. 8. In P2P, no network administrator is needed. 9. P2P networks are fast and not expensive to build or maintain. 10. P2P can be used at both home and for businesses. ...read more.