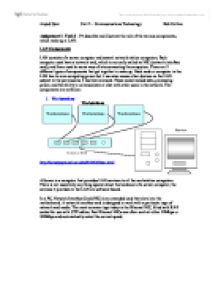 Assignment 2- Task 5 - P4-describe and illustrate the role of the various components, which make up a LAN. LAN Components LAN consists of a server computer and several network station computers. Each computer must have a network card, which is normally called an NIC (network interface card), and there must be some way of interconnecting the computers. There are 3 different types of components that get together to make up Each node or computer in the LAN has its own computing power but it can also access other devices on the LAN subject to the permissions it has been allowed. These could include data, processing power, and the ability to communicate or chat with other users in the network. The components are as follow: 1. Workstations Workstations http://homepages.uel.ac.uk/u0311625/star.html A Server is a computer that provides LAN services to all the workstation computers. There is not essentially any thing special about the hardware of a server computer; the services it provides to the LAN are software based. In a PC, Network Interface Card (NIC) is an extended card that slots into the motherboard. A network interface card is designed to work with a particular type of network and media. The most common type today is the Ethernet NIC, fitted with RJ45 socket for use with UTP cables. Fast Ethernet NICs can often work at either 10Mbps or 100Mbps and automatically select the correct speed. 2. Token Ring In Token Ring, the computers are connected so that the signal travels around the network from one computer to another in a logical ring. A single electronic token moves around the ring from one computer to the next. If a computer does not have information to transmit, it simply passes the token on to the next workstation. If a computer wishes to transmit and receives an empty token, it attaches data to the token. The token then proceeds around the ring until it comes to the computer for which the data is meant. ...read more.

(It can also be prevented by buying switches that can detect and deal with loops, for example by implementing the Spanning Tree Protocol). * A cheap hub with a 10BASE2 port is probably the cheapest and easiest way to connect devices that only support 10BASE2 to a modern network (cheap switches don't tend to come with 10BASE2 ports). The same goes for linking in an old thicknet network segment using an AUI port on a hub (individual devices that were intended for thicknet can be linked to modern Ethernet by using an AUI-10BASE-T transceiver). Switches Switches look very much like hubs and on the surface they perform the same function, i.e. they connect a number of computers together in an Ethernet LAN. However, hubs are 'dumb' devices; they simply receive a message, intensify it and broadcast it to all the other computers that are connected to the hub. Switches are 'intelligent'; they inspect the message sent from one computer, recognize the computer to which it is being sent and transmit the message only to that computer, not all the others connected to the switch. The benefit of this is that network traffic is significantly reduced, which reduces the prospect of collision occurring. Switches are slightly more costly to buy than hubs but, of their capability to improve the performance of the network, they are normally used in favourite to hubs. Switches vs HUBs - Which one is better? If you have anything more than one computer with a dial-up phone connection, you likely to have your computer connected to other equipment using Ethernet. Your setup could be as simple as one computer connected to a cable modem or DSL modem using Ethernet. If you have multiple machines, you either have a router with multiple ports (Ethernet connectors), a switch or a hub. If you have a router, it's simply a special case of being either a switch or a hub. ...read more.

I typed in 456 in phone text box and following screen appeared on my computer. Step 5 The system is asking me to choose an option from the connection availability screen. I am allowed to make new connection to all users or just to my self. If I choose it just for myself, connection will not be available until I log on to the PC. I chose connection for all users' option and clicked on next button. System showed me following screen on PC. Step 6 Network and dial-up connections screen is asking me to choose one of the options from the following options. I can choose from "Make a new connection, AAA, Local area Connection or Computer 1". I chose Computer 1 as an option and the following screen appeared on my system. Step 7 Connect computer 1 screen is asking me to choose user name and password and then click on dial button to connect to the Internet. After selecting my user name and password, I clicked on dial button as I was told by the system to do so. Following screen appeared on my system. Step 8 Virtual Modem screen is telling me to wait for the connection to be made. System is waiting for incoming connection on TCP port 28800 on Virtual modem. After a while system showed following screen on my PC. Step 9 This screen shows Network Area Connection status, which shows that connection is made and the speed of the Internet is, 10Mbps, so therefore my installing progress in completed and it is Internet Connection is successfully installed on the PC. I can now use the Internet. Final Conclusion To use FTP software, user must know the URL of an FTP server, and have a valid FTP user name and password. Once you have successfully logged on to an FTP server, you can transfer files to and from the server. ?? ?? ?? ?? Amjad Qazi Unit 5 - Communications Technology Bob Collins ...read more.