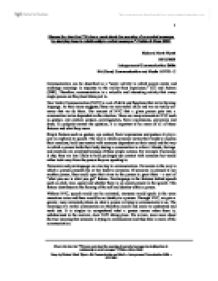 Discuss the view that &quot;We learn most about the meaning of nonverbal messages by studying them in relationship to verbal messages.&quot;

Discuss the view that "We learn most about the meaning of nonverbal messages by studying them in relationship to verbal messages." (Tubbs & Moss 2002) Richard Mark Wyatt 09/11/2004 Interpersonal Communication Skills BA (Hons) Communication and Media LEVEL C Communication can be described as a "social activity in which people create and exchange meanings in response to the reality they experience." Gill and Adams (1981). Therefore, communication is a valuable and interesting activity that every single person on this planet takes part in. Non Verbal Communication (NVC) is a set of skills and functions that aid in forming language. As their name suggests, these are non-verbal skills and we are totally un-aware that we do them. The amount of NVC that a given person puts into a conversation varies dependant on the situation. There are many elements to NVC such as gesture, eye contact, posture, paralinguistics, facial expressions, proxemics and dress. To properly answer the question, it is important to be aware of all of these features and what they mean. Simple features such as gesture, eye contact, facial expressions and posture all play a part in emphasis to speech. The way in which someone moves their hands to express their emotions, hold eye contact with someone dependant on their mood and the way in which a person holds their body during a conversation is critical. ...read more.

A person speaking in restricted code is also concerned with groups as they might only wish one or more people to hear what is being said. An elaborated code is different in the fact that it has a much more complicated syntax to it. The speech is much harder to predict and a speaker is less concerned with group relationships. An elaborated code is also about the uniqueness and individuality a person gives to their speech, perhaps maybe their own special words for something, a form of slang. Both restricted and elaborated codes of speech affect the verbal message as they dictate just how complex a message is being conveyed. Is the message easy to depict and work out or is it full on unique, long or interesting words? These codes also define identity. Linking these codes to the main features of NVC, we can start to understand more about the meaning of non-verbal messages as we have features that further emphasize speech. From here, it is easier to identify what sort of message is trying to be communicated. The Laswell Formula (Laswell 1948) is usually referred to as a transmission model for communication. By studying communication, Laswell believed that the following points must be considered if we are to fully understand communication. ...read more.

An adult ego state uses past experiences to do this. The three ego states allow us to further identify the non-verbal message behind speech as we can closer identify why the forms of NVC are being displayed as they are. The ego state drives the NVC and thus can affect and alter the reactions and messages conveyed in communication. The non-verbal messages show in communication can be affected in many ways. These messages can change throughout conversation and are also unique to the individual. Different forms of messages conveyed will evoke different reactions and emotions thus displaying alternate forms on non-verbal messages. How a person speaks through their chosen ego state and coding allows us to gain a greater appreciation for the variety of non-verbal forms of communication there are. It can be complicated to observe all of them, and some are less visible than others. It is important to remember than these are all sub-conscious and that everyone does them. This is why verbal messages more often than not always carry a form of non-verbal messages. WORD COUNT: 1259 1 1 Discuss the view that "We learn most about the meaning of nonverbal messages by studying them in relationship to verbal messages." (Tubbs & Moss 2002) Essay by Richard Mark Wyatt- BA Communication and Media - Interpersonal Comunication Skills - 9/11/2004 Essay Title goes here Essay by Your Name Here - Course&Year-Acronym-Here - Unit-Acronym-Here - hand-in Date-Here ...read more.