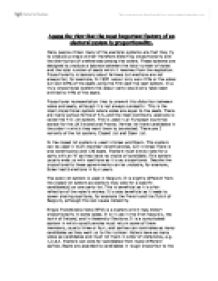 Assess the view that the most important feature of an electoral system is proportionality.

Assess the view that the most important feature of an electoral system is proportionality. Many people citizen many of the electoral systems are that they try to produce a single winner therefore distorting proportionality and the distribution of preferences among the voters. These systems are designed to produce a balance between the total number of votes and the total number of seats which it receives from the legislation. Proportionality is basically about fairness but elections are not always fair, for example, In 1997 Labour only won 44% or the votes but won 64% of the seats using the first past the post system. In a truly proportional system the labour party would only have been entitled to 44% of the seats. Proportional representation tries to prevent this distortion between votes and seats, although it is not always successful. This is the most proportional system where votes are equal to the seats. ...read more.

It is also beneficial as it leads to power sharing coalitions, for example the French and the Dutch of Belgium, although this can cause instability. Single Transferable Vote (STV) is a system which may distort proportionality in some cases. It is in use in the Irish Republic, the north of Ireland, and in Assembly Elections. It is a complicated system in which constituencies must return some of there members, usually three or four, and parties can nominates as many candidates as they want up to this number. Voters have as many votes as candidates and must list them in order of preference, e.g. 1,2,3,4. Electors can vote for candidates from many different parties. Seats are awarded to candidates in rough proportion to the amount of votes they obtain. It is an advantage that When voters use STV they have a great amount of choice, but STV tends to produce results with no overall majorities, which can cause coalitions. ...read more.

This is a good system as it had good proportionality and has an accurate reflection on vote's wishes. Many policies use a PR principle, looking for an assembly that mirrors the pattern of support in the country, for example, the conservatives won 33% of the votes in 2001 and this should have transferred into 217 seats under complete proportionality, but the only won 166 under the 'First Past the Post' system. FPTP is a majority system and is said to be conducive to British politics. It provides a stable government meaning that small parties do not hold the balance of power. It is proportional as there is one vote per. Person and the candidate with the most votes win. There is one big problem, votes for the losing candidate are wasted therefore voters are discouraged from voting at all. This system also exaggerates the winners mandate making it naturally disproportional. I think that proportionality is the most important feature rather than majority systems. They both have important and positive traits but proportional systems best reflect the wishes of electorate, therefore strengthening the democracy. ...read more.