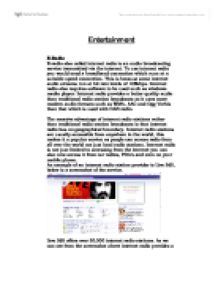 This differs from internet radio as users don't have to tune into a particular broadcast or program. Unlike radio stations Podcasters don't need to buy a licence to broadcast their programming which is why it has become popular and the general public has started to get involved. Below is a screenshot of a Podcasting website. Podcasts can be listened to using the same software as with internet radio players. You can also subscribe to an RSS feed this means the Podcasting software which you are using, automatically uploads content which matches your playlist. Government service E-Voting E-voting which is short for electronic voting is a type of voting method. This involves using electronic means to cast a vote in an election. It can involve the transfer of elections via telephones, private computer networks and of course the internet. Technology used in electronic voting includes punch cards, optical scan voting systems and direct recording electronic voting systems (DRE's). Voting over the Internet uses a PC with an Internet-connection to cast the vote and send it to be stored in another remote computer. ...read more.

* Using this method votes can be counted far more quickly so final election results are produces faster. * E-Voting allows people with disabilities to cast a vote on their in a private and secure manner. Risks in e-voting: * E-voting using the internet is done by public networks meaning it is far more difficult to identify the caster of a vote this way than current methods. * More difficult to identify any technical malfunctions. * The system fails to record enough back ups of voting information therefore if the system would fail it would be very difficult to do a 'recount' of votes. In May 2003, pilot schemes to test new methods of voting took place in 59 local authorities across England. In the experiment 6.4 million people were eligible to vote in these pilot areas. Schemes offered electors the chance to cast a vote electronically this was done in a variety of different of ways and included the Internet, by telephone, via text messaging and for the first time through interactive digital television. In its report on the 2003 pilot projects, the UK Electoral Commission recommended that technical requirements for future e-enabled elections should be further developed. ...read more.