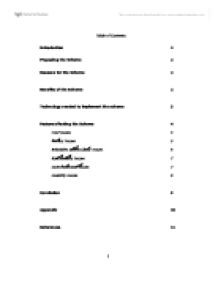 In the U.K there has been a major push for the introduction of national identity cards to all residents of the country. The cards are intended to use biometric technology to help maintain a high level of identity security

Table of Contents Introduction 2 Proposing the Scheme 2 Reasons for the Scheme 2 Benefits of the Scheme 2 Technology needed to implement the scheme 3 Factors affecting the Scheme 4 Cost Issues 4 Privacy Issues 5 Reliability and Accuracy Issues 6 Functionality Issues 7 Data Protection Issues 7 Usability Issues 8 Conclusion 9 Appendix 10 References 11 Introduction Since the events of 9/11 the western world has been at a heightened state of alert. This has brought about the need for better security measures to be introduced into the western societies. Countries like Canada, the U.S, and even the U.K have proposed new methods of monitoring the identity of individuals in their countries. In the U.K there has been a major push for the introduction of national identity cards to all residents of the country. The cards are intended to use biometric technology to help maintain a high level of identity security and are expected to help control identity fraud and the problem of illegal immigrants. The new cards are also intended to monitor individuals that might be linked with any forms of terrorism. Proposing the Scheme Last year the Home Secretary, David Blunkett, proposed introducing a bill which would require all residents in the U.K to have an ID card which would hold data about them and would be stored in a government database [4]. This bill was intended to realise the scheme thought up by him in November 2003 [3]. The scheme was expected to use biometric technology. Biometric ID cards are far more sophisticated than normal photo-based ID cards. This is because they use fingerprints, hand measurements or retina scans to confirm the bearer's identity. Reasons for the Scheme The main reasons for the Creation of the Identity Cards Act 2005 were to : [5] * Combat terrorism * Maintain economic partnership with United States and Europe * Fight money laundering and organised crime * Control immigration, asylum and illegal work * Decrease public and private sector fraud * ...read more.

There is the opinion that more thought is needed about ways of verifying identities. Even if biometrics achieved 99.999% accuracy, on a database of 100 million people, this could lead to thousands of false matches. Such multitude of errors could cost the government great amounts of money e.g. if an individual is mistakenly accused for a crime because of a mismatch by the system, the government would account for libel payments. Privacy Issues The new biometric ID cards scheme is intended to work alongside with a national database of all residents of the UK. The database is expected every individuals biometric data and some of their personal details. With the introduction of the scheme, the police will have new powers to check scene-of-crime fingerprints against the biometric records of the entire UK adult population under the government's national ID card scheme. [8] The plan has raised questions about the accuracy of fingerprints and whether they are reliable enough to identify suspects in a database of 64 million people. The proposals contained in the small print of the ID Cards Bill are an expansion of the scope of the ID card programme, introduced by the home secretary to fight organised crime, terrorism, fraud and illegal working. The ID Cards Bill gives police investigating crimes access to the national ID card database if they are unable to find matches on the police's national fingerprint system, the Home Office confirmed. The ID cards Bill stated that police retain fingerprints from crime scenes and it would be possible for the police to run checks of this information against the National Identity Register to identify possible suspects in unsolved cases. This would have broader applications than terrorism. The idea of a National Identity Register has caused an outrage of public opposition, because it is felt that the information held on this database, could be an infringement of their privacy. ...read more.

On the other hand there are a whole list of negatives that could arise from the introduction of the new scheme. Members of the public are like to feel that their privacy is being invaded because the scheme could result to the U.K turning into a Big Brother state. Also there are concerns by the public of who would have access to delicate information which the government require to be in the database about them. Such fears have lead to great opposition by the public, the media and even industry watchdogs. I feel that the idea of ID cards might be a good idea for the U.K as a method of increasing security but some of the plans which go with the scheme, like the use of a National Identity Database and the making the information on it accessible online, I disagree with. This is because the scheme could lead to mass information of different peoples identity being available to hackers and intruders. Those who attack the ID plan do so for the right reasons, but they have chosen the wrong target. The real danger lies not in small plastic cards but in huge databases. Appendix SWOT Analysis Strengths * Increases security from fraud and terrorist * Weaknesses * expensive to implement * Opportunities * it can be used as a replacement for passports and all forms of ID * Threats * it can still be hacked into and information on it be made vunerable PEST Analysis Political * opposition by ministers * Economical * cost to implement are very high * will cost the taxpayer a lot of money Social * racial discrimination towards muslims and Asians * Technological * viruses can affect the database * compatibility with the supplier database MOST Mission Statement * the tackle identity fraud, and terrorism * provide a registry of records of all individuals in the U.K Objectives * prevent crime and terrorism * help locate crime suspect * prevent fraud Strategies * using it as an the main identity recognition source in the U. ...read more.