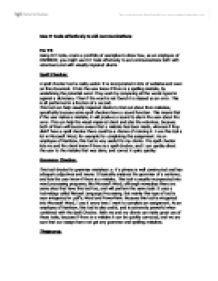 Use IT tools effectively to aid communications

Use IT tools effectively to aid communications For P5 Using ICT tools, create a portfolio of examples to show how, as an employee of RAINBOW, you might use ICT tools effectively to aid communications both with volunteers and with visually impaired clients. Spell Checker: A spell checker tool is really useful. It is incorporated in lots of websites and even on this document. It lets the user know if there is a spelling mistake, by underlining the potential word. They work by comparing all the words typed in against a dictionary. Then if the word is not found it is classed as an error. This is all performed in a fraction of a second. This tool can help visually impaired clients to find out about their mistakes, specifically because some spell checkers have a sound function. This means that if the user makes a mistake, it will produce a sound to alarm the user about the error. ...read more.

It uses a technology called Natural Language Processing. But mainly this type of tool is seen integrated in .pdf's, Word and PowerPoint. Because this tool is integrated into Microsoft Word, I use it every time I want to complete an assignment. As an employee of Rainbow, this tool is also useful, and is extremely powerful when combined with the Spell Checker. Both me and my clients can make great use of these tools, because if there is a mistake it can be quickly corrected, and we are sure that our essays have not got any grammar and spelling mistakes. Thesaurus: The Thesaurus is a book that has its words arranged by similarity, unlike a normal dictionary that states the definition of each word. This is called a synonym Ie. Exact, correct, accurate. It can give antonyms (the opposite of synonyms, so in this case it is words with opposite meanings). ...read more.

Instead of having a table representing various figures, all the information can be gathered and then displayed as a chart. This makes it much easier to interpret the information, because it is displayed with pictures, instead of just plain text. In technical terms, a chart is a graphical representation of data. A chart usually features a graphic with as less text as possible. This is because humans are able to understand facts better if they are displayed in images, rather than large amounts of text. There are lots of different types of charts, such as pie charts, bar charts, line charts and histogram charts. All these are used according to the data that the user has, and based on it a user makes a decision on what chart is more appropriate to produce. In Rainbow, charts are widely used. It is much easier for a visual impaired person to see an image of a chart, than a big table with lots of figures and text that are hard to understand. ...read more.