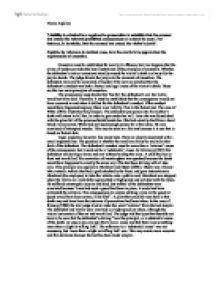 'Liability in criminal law requires the prosecution to establish that the accused has caused the relevant prohibited consequences or conduct to occur. For instance, in homicide, that the accused has caused the victim's death'. Explain, by reference to decided cases, how the courts have approached the requirement of causation. Causation must be established for nearly all offences, but it so happens that the crime of murder provides the best illustrations of the principles of causation. Whether the defendant's acts or omissions actually caused the victim's death is always for the jury to decide. The judge directs the jury as to the elements of causation. The defendant may only be convicted of murder if the jury are satisfied that the defendant's conduct was both a factual and legal cause of the victim's death. These are the two main principles of causation. The prosecution must decide that 'but for' the defendant's act, the victim would not have died. Therefore it must be established that the consequence would not have occurred as and when it did but for the defendant's conduct. If the conduct would have happened anyway, there is no liability. This is the factual test. The case of White (1910) illustrates this principle. The defendant put poison into his mother's drink with intent to kill her, in order to gain under her will. Later she was found dead with the glass full of the poisoned drink beside her. She had actually died from a heart attack. ...read more.

In Pagett (1983) several police officers were trying to arrest the defendant for several offences. He armed himself with a shot gun and used the victim as a human shield. He fired at two officers who returned the fire and killed the victim. He was convicted of manslaughter because it was reasonably foreseeable that the police would shoot back in self-defence and in the lawful exercise of their duty. The majority in the area of legal causation involve medical treatment. The defendant will still be held liable for murder or manslaughter if the treatment is improper of even negligent. In Smith (1959) the defendant stabbed the victim, who was dropped twice on a stretcher on the way to the hospice. He was not treated for forty-five minutes and staff did not realise that one of his lungs had been pierced causing a haemorrhage. Consequently, they gave him treatment, which was described in the court as "thoroughly bad and might well have affected his chances of recovery". The victim died and the defendant was charged with murder because it was said that the stab wound was still "operating" and "substantial" at the time of death. This may be seen as extremely unfair because the treatment and the hospice contributed greatly to the death. Only grossly abnormal treatment will be seen as not reasonably foreseeable according to Cheshire (1991). Here, the defendant had shot the victim in the stomach and in hospital he underwent bowl surgery which was successful. ...read more.

In Holland (1841) the defendant cut the victim on the finger, and the wound became infected. The victim ignored the fact that he needed his finger amputated and died of blood poisoning. The defendant was convicted of manslaughter. This may not be entirely fair because the victim refused help so maybe a conviction of either ABH or GBH would have been more appropriate. The same result occurred in the case of Dear (1996) where the defendant slashed the victim with a knife. The victim failed to seek medical help and even picked at his wounds - appearing to take the chance to commit suicide. The victim died and the defendant was convicted of murder. This may seem unfair as it was also known that the victim had a record of trying to commit suicide. Defendants cannot complain if their victims are particularly susceptible to physical injury. This is known as the 'thin skull' test. In Blaue (1975) the defendant stabbed the victim after she refused to have sex with him. She needed a blood transfusion but refused because she was a Jehovah's Witness. The defendant was convicted of manslaughter. This seems unfair because it was indicated from medical experts that she would have survived if she accepted the transfusion. It is clear that the law always requires causation when deciding whether convictions are upheld or quashed. Although the causation agreements in case law do seem to be morally inaccurate, especially where there are new intervening acts. It seems that the factual causation test is much more justified than the legal one. ?? ?? ?? ?? Nicole Aquilina ...read more.