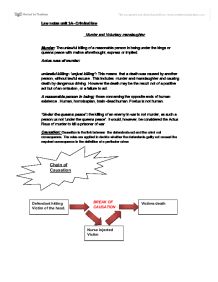 Name of Case: Jordan 1956 Legal Facts: Defendant stabbed victim, who was taken to hospital, a week later the wound was almost healed, doctors gave him incorrect injection and he died. Judicial principle: the medical treatment was 'palpably wrong' and would not have 'precluded' a jury from holding that death which was caused by the defendants action. Name of Case: Smith 1959 Legal Facts: Defendant stabbed Victim, which cause the victim to have a pierced lung. At the first aid post the medical officer was busy and took some time to get the victim that died about an hour after the stabbing. Judicial principle: the treatment he was given was thoroughly bad and might well have affected his chances of recovery, but medical treatment correct or not correct does not break the chain of causation, at the time of the death the original wound was still an operating cause and a substantial cause, then the death can be said to be a result of the wound that some other cause is also operating. ...read more.

Name of Case: Roberts 1971 Legal Facts: defendant was in a car with a victim who was the passenger in the defendants car she injured herself by jumping out the car as she claimed that the defendant sexually attacked her. Judicial Principle: it was held that 'Occasioning' in ABH relates to causation and is an objective test. If the common assault was intentional there is no need to consider recklessness. The proper test for 'occasioning' is not whether the defendant actually foresaw the conduct of the victim which resulted in the actual bodily harm, but whether that conduct could have reasonable foresee as the consequence of what he was doing or saying. Name Of Case: Williams 1992 Legal Facts: Defendant picked up a hitchhiker who was the victim and allegedly tried to rob him. The victim jumped from the car at about 30mph, and suffered head injuries from which he died. Judicial Principle: the victims own act might be unreasonable and so break the chain of causation. Therefore the victim caused its own injuries. The Homicide Act 1957, S3 Yes No Subjective Test: Objective Test: No Yes Yes Voluntary manslaughter: Diminished responsibility: http://sixthformlaw.info/02_cases/mod3a/cases_34_vol_provocation.htm#Bedder,%20R%20v%20%281954%29%20HL ?? ?? ?? ?? Law notes unit 3A- Criminal law ...read more.