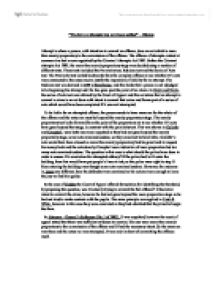 The law on attempts has now been settled Discuss

"The law on attempts has now been settled" - Discuss Attempt is where a person, with intention to commit an offence, does an act which is more than merely preparatory to the commission of the offence. The offence of attempts existed at common law but is now regulated by the Criminal Attempts Act 1981. Before the Criminal attempts Act 1981, the more than merely preparatory stage was decided using a number of different tests. These tests included the Proximity test, Rubicon test and the Series of Acts test. The Proximity test looked backwards from the complete offence to see whether D's acts were connected to the actus reus to justify the imposition of liability for an attempt. The Rubicon test was devised in DPP v Stonehouse, and this holds that a person is not adjudged to be beginning his attempt until he has gone past the point of no return. In Boyle and Boyle, the series of acts test was referred by the Court of Appeal and this act states that an attempt to commit ...read more.

The question in this case is what should the police have done in order to ensure D's conviction for attempted robbery? If the police had let D enter the building, then this would have put people's lives at risk; so the police were right to stop D from entering the building even though some acts remained undone. However, the outcome in Jones was different; here the defendant was convicted as his actions were enough to leave the jury to find him guilty. In the case of Geddes the Court of Appeal offered formulation for identifying the threshold, by proposing the question, was D actually trying to commit the full offence? D had clear intent to commit the crime; however he had not gone beyond the mere preparation stage as he had not tried to make contacts with the pupils. The same principle was applied in Tosti & White, however in this case they were convicted as they had admitted that they tried to burgle the farm. ...read more.

In Attorney - General's reference (No 3 of 1992), the precedent of Khan was followed. Here it was held that D had intended to damage property and was therefore being reckless as to whether life would be endangered. If a crime is impossible to commit, it does not necessarily mean that no one can be convicted of attempting it. At common law, there was no liability for attempt if the crime attempted was physically or legally impossible. D could only be liable if his methods were inadequate to commit the substantive offence. This was seen in White, where D gave insufficient poison to his mother. In conclusion I think that the law on attempts has now been settled as the courts now have guidance on when to convict for any crime. The Court of Appeal have settled attempted murder alleges and also the relevance of recklessness has been settled. However, despite all this guidance, some cases have still been wrongly decided. This was seen in the appeal of Attorney - General's reference (No 1 of 1992), where Court of Appeal held the D was only in short of committing the offence itself. ...read more.