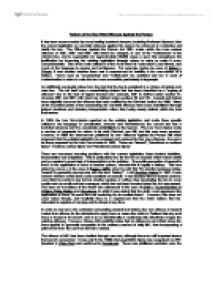 Is the current law on the non-fatal offences against the person satisfactory?

Reform of the Non-Fatal Offences Against the Person It has been recommended by many leading academic lawyers, including Professor Spencer, that the current legislation on non-fatal offences against the person be reformed to modernise and clarify the law. The Offences Against the Person Act 1861, under which the more serious offences of ABH, GBH and GBH with intent are charged, is one of the "workhorses" of the criminal law, and is responsible for approximately 80,000 cases a year; this strengthens the justification for improving the existing legislation through reform in order to make it more comprehensible. One of the main criticisms of the Act is that it is "outmoded" (Jack Straw), and much of the language is arcane and ambiguous. For example, before the case of Wilson v Pringle, it was unclear whether there was a requirement for hostility in the commission of a battery. Terms such as "occasioning" and "maliciously" are outdated and are in need of modernisation in order to make the law more accessible, particularly to laypeople. An additional complexity arises from the fact that the law is contained in a mixture of statute and case law. The Act itself was a consolidating statute that has been described as a "ragbag of offences" due to the lack of logical structure (for example, ABH is defined under section 47, whereas GBH and GBH with intent are defined under sections 20 and 18). ...read more.

It was only in the 1990s that psychiatric injury was recognised as ABH (decided in Chan-f**k and confirmed in Constanza). There was additional confusion over the mens rea of section 47, as it was suggested in numerous cases, including DPP v K, that objective recklessness would suffice. However, in Savage, the court ruled that recklessness must be subjective. Despite this, it was held in the same case that the offence requires the same mens rea as that of assault and battery (intention or recklessness in either causing the victim to fear the apprehension of force or applying force to the victim), even though it carries the same maximum sentence of five years as a section 20 offence. The Government Bill states that injury can be physical or mental for an offence of "intentional or reckless injury", where it "includes...impairment of a person's physical condition" and "any impairment of a person's mental health". Physical injury also includes "pain"; this appears to broaden the law to include not only harm that is "calculated to interfere with health and comfort" (Miller), but also harm that is "transient or trifling" (Donovan), widening the scope of the current legislation. The uncertainty surrounding sections 20 and 18 has resulted in a requirement for a great deal of interpretation by judges, as crucial words such as "grievous", "maliciously" and "wounding" are not defined in the Act. ...read more.

However, arguments in favour of reform are that both the Government and the Law Commission have proposed reforming the legislation in order to create a set of offences which is clearer, fairer and more logical. This would be reflected through the increase in the sentence for GBH and the higher degree of mens rea required for a conviction under the proposed legislation. In addition, reforming the law and updating the language would make it more accessible to laypeople and legal professionals alike. The complexity of the law would also be reduced, as it would not be contained in so many sources: the Criminal Justice Act 1988, the Offences Against the Person Act 1861 and the common law. In conclusion, it appears that the law on non-fatal offences against the person is in need of reform to modernise the legislation to ensure that it meets the current social context. One of the main problems with the legislation is that it is so outdated; this has forced judges to extend the law to include new situations that could not have been covered by the legislation in the interests of justice. Despite the major questions of law having been resolved, the law lacks clarity and cohesion. The heavy reliance upon the Offences Against the Person Act 1861 gives it great importance, further justifying the need for reform of the current legislation. ?? ?? ?? ?? ...read more.

Summary: A good outline of some of the problems with the current law and including some comments on suggestions for reform.
Rating: ****