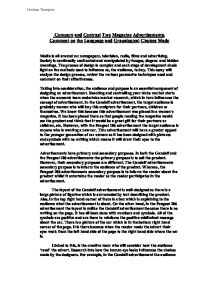 Compare and Contrast Two Magazine Advertisements, Comment on the Language and Grapalogical Choices Made Media is all around us: newspapers, television, radio, films and advertising. Society is continually confronted and manipulated by images, slogans and hidden meanings. The process of design is complex and each stage of development sheds light on the methods used to influence us, the audience, to buy. This essay will analyse the design process, review the various persuasive techniques used and comment on their effectiveness. Taking into consideration, the audience and purpose is an essential component of designing an advertisement. Reaching and controlling your niche market starts when the accounts team undertake market research, which in turn influences the concept of advertisement. In the Gandalf advertisement, the target audience is probably women who will buy this sculpture for their partners, children or themselves. We know this because this advertisement was placed in a women's magazine. It has been placed there so that people reading the magazine would see the product and think that it would be a great gift for their partners or children, etc. ...read more.

It has all been done with numbers and symbols. All of the symbols are positive and are there to reinforce the positive subliminal message about the car. There is a picture of the car which is in the bottom right hand corner of the page. It is there because when the reader reads the advert their eyes work from the left hand side of the page to the right hand side where the car is. Linked to this, is the creative team who will consider how the audience 'read' the advert. Research into how the human eye looks influences the choices made by the designers. For example, in the Gandalf advertisement the audience are drawn to the large picture of the product which is in the centre of the page, because this image is large it stands out and the reader's eyes are drawn to it. In contrast to the Gandalf advertisement, the Peugeot 206 advertisement has the reader look at each of the symbols working from the left hand side of the page to the right whilst trying to depict them. ...read more.

Also, the 'film can' promotes safety and protection with the tough canister protects the delicate film inside just like the car and the person inside the car. Also, the symbols point to the potential customers such as the gender of the potential buyer. The 'yin/yang' represents the balance of masculine/feminine and that the car is suitable for both men and women drivers. In addition, there is the fact of how the car makes you feel as a driver. The 'smiley face' is happy which states that the car is joyful and pleasurable to drive. Additionally, there is the 'heart' which states love, once you've driven the car once you will fall in love with the car and want to own it. In conclusion, both the advertisements set out to persuade the reader to buy their product. The Gandalf advertisement uses language to persuade the reader which is far more effective as the reader can read about the qualities of the figurine and see the detail in the design of the figurine. Where as, the Peugeot 206 advertisement uses symbols to persuade. These symbols persuade the reader but doesn't do it as effectively as the Gandalf advertisement as there are no words which means that it is more difficult to understand and follow. ...read more.