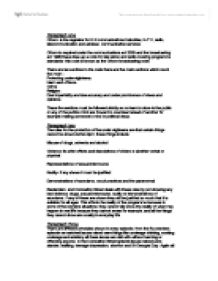 Eastenders and Coronation Street deals with these rules by not showing any bad violence, drugs, sexual intercourse, nudity or demonstrations of exorcisms. If any of these are shown they will be justified

Paragraph one Ofcom is the regulator for U.K communications industries, in T.V, radio, telecommunication and wireless communication services. Ofcom is required under the communications act 2003 and the broadcasting act 1996 these draw up a code for television and radio covering programme standards: this code is known as the Ofcom broadcasting code. There are ten sections to the code there are five main sections which count the most:- Protecting under eighteens. Harm and offence. Crime. Religion. Due impartiality and due accuracy and under prominence of views and opinions. These five sections must be followed strictly so no harm is done to the public or any of the publics mind are forward to one idea instead of another for example making someone's mind in political views. ...read more.

This affects the reality of the programme because in some of the storyline situations they cannot fully show the reality of what may happen in real life because they cannot swear for example, and all the things they cannot show are usually in everyday life. Paragraph three There are different principles shown in every episode, from the Eastenders episode we watched issues raised were things like underage drinking, working underage and adultery all these issues are delt with without harming or offending anyone. In the Coronation Street episode issues raised were slander, stalking, teenage depression, abortion and St Georges Day. Again all these issues were raised without insulting people. ...read more.

The commercial breaks are limited and regulated so they suit the stereotypical types who watch that certain programme but in soap opera's instance all ages watch so there is adverts for all ages. Coronation Street and Eastenders are similar in that both don't show any products, brand names or designs so people are not persuaded to buy one product over another. Paragraph five Conclusion My opinion is that soap opera's can never be real because of the regulations they are under, for example swearing and abuse is apart of everyday life even if it is to the minimum. However I don't think people watch them, for the realism of the programme but for the gossip or the melodrama others for the humour or the storylines which may help people with similar situations. ?? ?? ?? ?? ...read more.