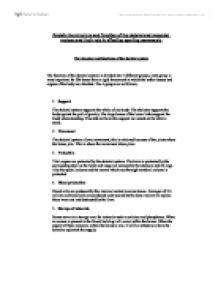 Explain the structure and function of the skeletal and muscular systems and their role in affecting sporting movements The structure and functions of the skeletal system The function of the skeletal system in divided into 5 different groups, each group is very important. Its 206 bones form a rigid framework to which the softer tissues and organs of the body are attached. The 4 groups are as follows; 1. Support The skeletal system supports the whole of our body. The skeleton supports the body against the pull of gravity. The large bones of the lower limbs support the trunk when standing. If we did not have this support we would not be able to stand. 2. Movement The skeletal system allows movement; this is achieved because of the joints where the bones join. This is where the movement takes place 3. Protection Vital organs are protected by the skeletal system. The brain is protected by the surrounding skull as the heart and lungs are encased by the sternum and rib cage. Also the spinal column and the nerves which run through vertebral column is protected 4. Blood production Blood cells are produced by the marrow located in some bones. Averages of 2.6 million red blood cells are produced each second by the bone marrow to replace those worn out and destroyed by the liver. 5. ...read more.

4. Pivot A pivot joint allows bones to pivot or rotate against each other. The atlas (first cervical vertebrae) and the axis (second cervical vertebrae) pivot against each other. 5. Hinge The hinge joint allows flexion and extension of the joint. The joint acts like a hinge on a door, allowing the joint to "open" and "close" 6. Gliding Gliding joints occur between the surfaces of two flat bones that are held together by ligaments. Some of the bones in your wrists and ankles move by gliding against each other. The structure and functions of the muscular system The muscular system is composed of specialized cells called muscle fibres. Their predominant function is contractibility. Muscles, where attached to bones or internal organs and blood vessels, are responsible for movement. Nearly all movement in the body is the result of muscle contraction. Your body contains around 650 muscles in your body and make up roughly half of your body weight. There are 3 types of muscles that are found in the body; 1. Involuntary muscles Smooth, uninucleated, and non-branching muscles that are not directly controllable at will. These include the radially arranged iris muscles, the digestive system, reproductive system, major blood vessels, the skin and internal organs, and are all controlled by the autonomic nervous system 2. ...read more.