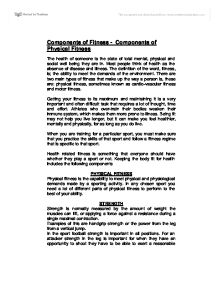 Components of Fitness - Components of Physical Fitness The health of someone is the state of total mental, physical and social well being they are in. Most people think of health as the absence of disease and illness. The definition of the word, fitness, is; the ability to meet the demands of the environment. There are two main types of fitness that make up the way a person is, these are: physical fitness, sometimes known as cardio-vascular fitness and motor fitness. Getting your fitness to its maximum and maintaining it is a very important and often difficult task that requires a lot of thought, time and effort. Athletes who over-train their bodies weaken their immune system, which makes them more prone to illness. Being fit may not help you live longer, but it can make you feel healthier, mentally and physically, for as long as you do live. When you are training for a particular sport, you must make sure that you practice the skills of that sport and follow a fitness regime that is specific to that sport. Health related fitness is something that everyone should have whether they play a sport or not. Keeping the body fit for health includes the following components PHYSICAL FITNESS Physical fitness is the capability to meet physical and physiological demands made by a sporting activity. ...read more.

The reason defenders need endurance is because they have to keep up with any opposing players whilst under attack and if a team is constantly defending the defenders have to be in very good shape to be able to cope. Goalkeepers don't particularly need endurance for running around as their job in a team requires them to stay inside the 18 yard box, however they do need to have a good level of endurance to be able to stay in a constant position of readiness for a whole match. Bent knee sit-ups are a good method of increasing muscular endurance, as you have to push yourself to perform well. SPEED Speed is the maximum rate at which a person is able to move their body. Good ways of testing for speed are sprints, extended training of sprints can also lead to faster times. It is not just leg speed that a sprinter would have, but athletes who can throw a javelin require arm speed. All footballers need to be fast, the flow of the game depends highly on this and to keep up with the play you cannot be slow. Attacking players have to have speed when on the ball or making crucial runs. It is important to beat defenders using speed or getting behind them to collect the ball. ...read more.

Hand/eye co-ordination is needed when hitting a moving ball in tennis, cricket and baseball. Foot/eye co-ordination is needed when volleying a football or juggling the ball. Attackers, especially strikers, are expected to be able to volley a ball well enough to make a considerable impact with the target. This requires precise timing, thought and concentration. An example fo when a midfield player may use co-ordination in a game of football is if they flicked the ball up and then volleyed it over a player so an attacker could run onto the ball. Defenders co-ordination skills would not really be expected to be as precise as attackers and midfielders. Times a defender may use this type of skill may be a simple act of volleying the ball high and away from danger. Goalkeepers need both hand/eye co-ordination and foot/eye co-ordination to do their job properly. Saving the ball by catching it or punching it away requires skill and dealing with pass backs using the feet are also examples of this. Training to improve co-ordination can be done with simple training methods such as juggling small balls using the hands or using footballs and using your feet. Another aspect of fitness is attitude. A good mental attitude will help a person want to stay in shape and help the body achieve high levels of fitness. If a person has decided that they're "not sporty", then they're going to have a difficult time working past their attitude to achieve even basic fitness for health. ...read more.