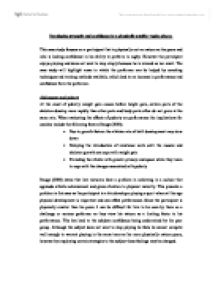 Developing strength and confidence in a physically smaller rugby player.

Developing strength and confidence in a physically smaller rugby player. This case study focuses on a participant that is physically not as mature as his peers and who is lacking confidence in his ability to perform in rugby. However the participant enjoys playing and does not want to stop simply because he is viewed as too small. The case study will highlight areas in which the performer can be helped by coaching techniques and training methods available, which lead to an increase in performance and confidence from the performer. Adolescents and puberty At the onset of puberty weight gain occurs before height gain, certain parts of the skeleton develop more rapidly than other parts and body parts often do not grow at the same rate. When evaluating the effects of puberty on performance the implications for coaches include the following factors Douge (2000). * Due to growth factors the athletes rate of skill development may slow down * Delaying the introduction of resistance work until the muscle and skeleton growth can cope with weight gain * Providing the athlete with greater privacy and space while they learn to cope with the changes associated with puberty Douge (2000) ...read more.

Since one of the keys of successful tackling in rugby union is to go low the subject need not to focus on this as much as his peers as his stature means he is already in a low body position. This allows one step of teaching the tackle to the subject to be perfected with minimum effort, the coaching of the skill should then focus on the other factors such as the arms and head placement. Because the subject is already in low position this allows a technically good tackle to be made as he will automatically be tackling around the legs region, and without the legs the attacker cannot move. By spending some time on developing this skill with the subject their confidence will increase as he will begin to feel that he can compete with the more physically developed in the group and can tackle well in a David Vs Goliath situation. Another area that could be developed is the strength of the subject. Traditionally it has been the view that strength training, in particular resistance training should not be performed by the young athlete. ...read more.

overall program * Resistance training with body weight should be encouraged * Emphasis should be placed on personal development and not competition * The young athlete must never train alone * Correct technique should be demonstrated and the child should always be correctly spotted * Sessions should be directed toward high repetitions and low loads * One day of rest should precede every training day * The emphasis of the programme should be on correct technique which should never be compromised * The programme should be developed by a suitably qualified coach The research shows that strength training could be of benefit to the young performer if applied under strict conditions and correct training techniques are used. By using resistance training in this case it could also boost the subjects confidence as he will feel he is addressing the facet that is holding him back. However parents consent must be gained before any resistance training is prescribed and the above NSCA points should be strictly adhered to. The suggestion to the subject of using resistance training is therefore an informed one and could be used to the advantage of the subjects performance as detailed by the research. ...read more.