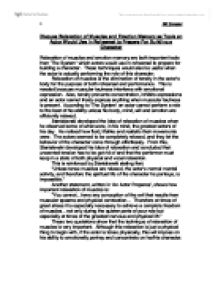 Discuss Relaxation of Muscles and Emotion Memory as Tools an Actor Would Use in Rehearsal to Prepare For Building a Character.

There are many times when an actor would use relaxation of muscles when preparing for a role. The technique would be used in preparation for rehearsal in order for the performer to be able to get into the role of their character and concentrate fully on this instead of other stresses. Also, the relaxation of muscles would be used before a performer goes on stage for the actual performance as this is a time when they especially need to be relaxed in order for the performance to be lifelike and believable. My opinion on relaxation of muscles is that it is very useful for an actor to be relaxed while preparing for a role. This is because I think that if an actor has not prepared in this way then she/he may still be concentrating on other pressures that they have, they may not be able to perform believably and the performance would not be as lifelike and would not have as much of an impact on the audience, who are ultimately the most important people in any performance. ...read more.

It was also said that "your first concern should be to find the means of drawing on your emotional material." This emphasizes the importance of emotional memory because it states that it should be the actor's "first concern." An actor may want to use emotion memory to understand the way his character is feeling. In order to do this, they can draw back to their own personal experiences, and therefore the performance and rehearsals would be more believable and lifelike. My opinion on emotion memory is that it can be a useful tool for an actor in certain situations. However, in some situations or for some actors, it may not be appropriate, and this is probably a reason why Stanislavski withdrew from this technique. In conclusion, both relaxation of muscles and emotion memory are useful tools an actor would use in rehearsal to prepare for building a character. I think that for most actors, in most situations, these tools are useful, however, there are also other useful tools which could be used as replacements or in conjunction with relaxation of muscles and emotion memory. 1 Ali Cooper ...read more.