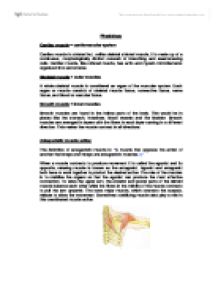 Physiology - muscles and joints. Different types and their use in sports.

Physiology Cardiac muscle = cardiovascular system Cardiac muscle is striated but, unlike skeletal striated muscle, it is made up of a continuous, morphologically distinct network of branching and anastomosing cells. Cardiac muscle, like striated muscle, has actin and myosin microfilaments organized into sarcomeres. Skeletal muscle = outer muscles A whole skeletal muscle is considered an organ of the muscular system. Each organ or muscle consists of skeletal muscle tissue, connective tissue, nerve tissue, and blood or vascular tissue. Smooth muscle = inner muscles Smooth muscles are found in the hollow parts of the body. This would be in places like the stomach, intestines, blood vessels and the bladder. Smooth muscles are arranged in layers with the fibers in each layer running in a different direction. This makes the muscle contract in all directions. Antagonistic muscle action The definition of antagonistic muscle is: "A muscle that opposes the action of another the biceps and triceps are antagonistic muscles (1)" When a muscle contracts to produce movement it is called the agonist and its opposite, relaxing muscle is known as the antagonist. Agonist and antagonist both have to work together to product the desired action. ...read more.

This allows for movement like a hinged door in only one place. Both the elbow and the knee are modified hinge joints. They bend up and down in one place quite easily in but are also capable of very limited rotation. Pivot joint A projection from one bone turns within a ring shaped socket of another bone or the ring turns around the bony projection. A pivot joint formed by the top two cervical vertebrae allows the head to turn from side to side. Fixed and semi-movable joints Not all joints are freely movable. After growth is completed, the bones of the skull become fixed together by fibrous tissue forming immovable suture joints. In the lower leg, the tibia and fibular are stabilized by ligaments that allow only a small amount of movement. Spinal joints Individual spinal joints do not have a wide range of movement, but working together they give the spine great flexibility, letting it arch backwards, twist around and curve forwards. Bone types The shapes of bones reflect their functions. There are 5 different types of bone in the body these are: * Long bones. Such as the femur. This acts as a lever to raise and lower the leg. ...read more.