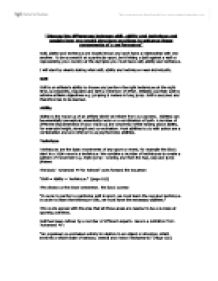 "Discuss the differences between skill, ability and technique and explain how you would structure practices to enhance these components of a performance" Skill, ability and technique are closely linked and each have a relationship with one another. To be successful at a particular sport, be it hitting a ball against a wall or representing your country at the olympics you must have skill, ability and technique. I will start by clearly stating what skill, ability and technique mean individually. Skill Skill is an athlete's ability to choose and perform the right techniques at the right time, successfully, regularly and with a minimum of effort. Athletes use their skill to achieve athletic objectives e.g. jumping 9 meters in long jump. Skill is acquired and therefore has to be learned. Ability Ability is the make up of an athlete which we inherit from our parents. Abilities can be essentially perceptual, essentially motor or a combination of both. A number of different characteristics of your make up are concerned whilst talking about ability, for example height, strength and co-ordination. ...read more.

Here is a definition of ability: "Motor abilities are innate inherited traits that determine an individuals co-ordination, balance, ability and speed of reactions" (R. Arnot and C. Gaines) The difference between skill and ability is that a skill can be taught and changed and your ability is something that is inherited from your parents, is natural and cannot be taught. In order to perform a particular skill in sport, we must learn the necessary technique. Technique is often confused with skill. To perform a particular skill in any sport you will have to a required technique. There are a number of classification continuums that may be used in conjunction with each other to build up a profile of a particular skill. There is Knapp's open-closed continuum (page 104), which involves skills being categorised into open or closed skills. An example of an open skill is a tackle in rugby. It is very difficult to improve an open skill in any sport because the situation in which it occurs is always different but the skill will be improved over time through experience. ...read more.

The idea that skill equals ability plus technique is the perfect way to describe how to be able to achieve a particular skill. However there are a number of different aspects which come into consideration when performing a skill and being successful at that skill. The definitions of the three practices in these components of performances put forward in the literature review section by the experts are all clear definitions that show the true meaning of the terms skill, ability and technique. The idea that ability cannot really be improved I disagree with because both some top experts and myself as an athlete believe that there are certain ways in which you can improve on aspects such as hand/eye co-ordination. The way in which technique can be improved is pretty straightforward but it creates other issues such as why some sportsmen or women with a poor technique still excel in their chosen sport? Overall skill is developed by having good ability and having a technique that suits your body type. ...read more.