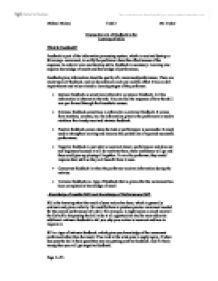 Discuss the role of feedback in the Learning of skills

Discuss the role of feedback in the Learning of skills What is Feedback? Feedback is part of the information processing system, which is received during or following a movement, to notify the performer about the effectiveness of the response. In order to learn and develop skills, feedback is necessary. Learning also requires knowledge of results and knowledge of performance. Feedback gives information about the quality of a movement/performance. There are many types of feedback, and we should know each one and the effect it has on skill improvement and value related to learning stages of the performer. * Intrinsic feedback-is sometimes referred to as internal feedback. All this information is inherent to the task. You can feel the response of how the skill was per formed through the kinesthetic senses. * Extrinsic feedback-sometimes is referred to as external feedback. It comes from teachers, coaches, etc. the information given to the performers is used to reinforce the already received intrinsic feedback. * Positive feedback-occurs when the task or performance is successful. It could used to strengthen learning and increase the probability of repeated successful performance. * Negative feedback-is just what is incorrect about a performance and does not suit beginners because it will de-motivate them, there confidence will go and they could give up playing all together. ...read more.

Performer gains the images of the action they are performing. They correct the skill by experience and extrinsic feedback fro the coach. Visual is useful at this stage, but the performer cannot yet interpret intrinsic feedback, this means they have to rely on the extrinsic feedback from their coach. This means KR is more useful to the performer because they can see the actual outcome of their performance. KP is not as good for them as they do not have a clear motor plan against which to measure kinaesthetic feedback has not yet been developed. For example when a player is learning how to shoot from the penalty line, they watch how the coach performs the shot then tries to put the movement into practice themselves. Positive feedback is more important is more useful than negative feedback at this stage. For example when a triple jumper gets their stride right, and hits the bored perfectly they take this and try harder to do the same again. If they were to get a no jump it would nock their confidence and they may chose to give up. Associative stage This stage is the motor phase of learning, feedback occurs to understand what they are performing correctly and what elements they need to work on, verbal feedback is essential at this stage. ...read more.

For example when a badminton match has finished a coach will the performance with their player, this will only be a short amount of feedback but will be taken on board quickly, and next time the player can try perform better. Feedback can also be used as an incentive if the coach sets a target for the performer, the goal should be achievable. If the performer works for it, when they reach this target a couple of times it acts as motivation. Conclusion In conclusion, feedback is a source of information, which tells the performer the outcome of their movement. It can act in different ways and have different effects on the performers. Feedback can produce positive or negative responses depending on how well the coach puts it across and how the learner takes it on board and uses it. Feedback must be interesting to the performer to keep them wanting to use it and improve, it also has to be given in the correct amount, otherwise, and it may not have the desired effect. It has also known that target setting with feedback is excellent in the learning process. Feedback can be well used if given correctly by the coach and is analysed by the performer correctly. ?? ?? ?? ?? Michael Haines Task 2 Mr. Taylor Page 1 of 3 ...read more.