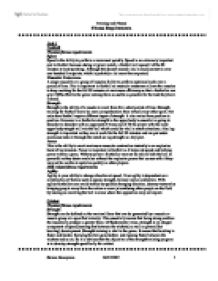 Task 1 Football Physical fitness requirements Speed Speed is the ability to perform a movement quickly. Speed is an extremely important part in football because during a typical match, a football will spend 2 of the 90 minutes at least sprinting. Although this doesn't sound a lot, it could convert to over one hundred 5m sprints, which is probably a lot more than expected. Muscular Endurance A single muscle's or a group of muscles ability to perform sustained work over a period of time. This is important in football as muscular endurance allows the muscles to keep working for the full 90 minutes at maximum efficiency so that a footballer can give 100% effort to the game making them as useful as possible for the task they have in hand. Strength Strength is the ability of a muscle to exert force for a short period of time. Strength training for football has to be more comprehensive than virtually any other sport. Not only does football require different types of strength it also varies from position to position. However in a footballer strength in the upper body is essential as going to shoulder to shoulder with an opponents 9 times out of 10 the player with the most upper body stregth will win the ball which could be vital in match situations. ...read more.

Being strong through the trunk is critical to developing good posture and preventing back soreness and injuries in cricket. With reference to cricketers, core muscular strength is vital to playing for a sustained period of time and playing performance. Reaction Time Reaction time is the time it takes for a person to respond to a signal, this is a necessity in cricket as there are many situations where a cricketer will need good reaction times from batting when the ball is travelling at 70+ mph and also in the field with catching as reaction time could be the difference between winning and losing a match because of a dropped catch Agility Being agile is the ability to change position and direction quickly; it demands a high level of balance, stability and co-ordination. The nature of cricket brings about unpredictable movements and situations that need to be reacted to quickly. Basketball Physical fitness requirements Cardiovascular Endurance CV Endurance is the body's ability to exercise whole muscle groups over an extended period of time at moderate intensity, utilising aerobic energy. It is essential in basketball as games last for a long period of time and players need to carry working with their bodies efficiently without tiring to be of full use to the team Muscular Endurance A single muscle's or a group of muscles ability to perform sustained work over a period of time. ...read more.

Skill-related * All the sports need agility as it is essential to change direction quickly although the reason why varies for each sport such as basketball to weave away from a marker in order to get them vital inches of space that allow them to get a basket. * Reaction time is needed in all three sports as catching and reacting is needed in cricket and basketball and a good reaction time helps aid their performance in all of the sports, such as a wicketkeeper reaching to catch a nick from the batsmen's bat or in football a keeper reacting to a deflection off the wall from a free kick * Flexibility is needed in basketball as it requires the athletes to move and bend into space where as flexibility in cricket and football is not really a vital aspect of the game * Body composition in cricket is an important aspect of the game due to the enormous stress that undergoes within a game where as in football and basketball not as much stress is exerted on each body part so body composition is not such an important feature of the game * Agility in football and basketball is different as it means being able to change direction quickly to keep possession of the ball. Where as in cricket it is used to change direction to catch a ball. Training and Fitness Fitness Requirements Steven Honeyman 04/12/2007 1 ...read more.