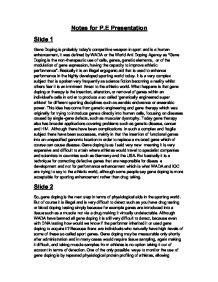 Gene doping in sport. Gene Doping is the non-therapeutic use of cells, genes, genetic elements, or of the modulation of gene expression, having the capacity to improve athletic performance

Notes for P.E Presentation Slide 1 Gene Doping is probably today's competitive weapon in sport and is a human enhancement, it was defined by WADA or the World Anti Doping Agency as "Gene Doping is the non-therapeutic use of cells, genes, genetic elements, or of the modulation of gene expression, having the capacity to improve athletic performance". Basically it is an illegal ergogenic aid that is used to enhance performance in the highly developed sporting world today. It is a very complex subject that is spoken very frequently as science fiction becoming a reality whilst others fear it is an imminent threat to the athletic world. What happens is that gene doping or therapy is the insertion, alteration, or removal of genes within an individual's cells in order to produce a so called 'genetically engineered super athlete' for different sporting disciplines such as aerobic endurance or anaerobic power. This idea has come from genetic engineering and gene therapy which was originally for trying to introduce genes directly into human cells, focusing on diseases caused by single-gene defects, such as muscular dystrophy. Today gene therapy also has broader applications covering problems such as genetic disease, cancer and HIV. Although there have been complications in such a complex and fragile subject there have been successes, mainly in that the insertion of functional genes into an unspecified genomic location in order to replace a mutated gene which of course can cause disease. ...read more.

For example there already exists a Human Gene Map for performance and health-related fitness phenotypes which is updated every year which lists the genes which, in different combinations, could hypothetically produce a so-called genetically engineered super athlete. It is displayed in a table format as ACE-II which benefits aerobic endurance performers it improves the efficiency of mitochondria and also extra ATP has been shown to improve or benefit these athletes. And also IGF-1 which benefit anaerobic athletes of more power and strength abilities because there is an increase in enzyme activation for increasing the update of amino acids to increase muscle growth and strength. So, this map just indicates what gene doping is capable of in a more simple way or enlarged way rather. Genetic technologies, which is a biotech company based in Australia has developed a DNA test which it claims can identify whether a child has the genetic make-up to excel in either sprint and power sports or endurance sports. This would be extremely useful for predicting their trainability and thus the specificity of training regimes, which will help the development of young athletes as trainers and sporting academies will know of their genetic expression or make-up then knowing what they can excel in and what type of training they will need to succeed at the highest level. ...read more.

Whereas by doing so via gene doping it is as we know virtually undetectable. But the exact number of years that it will take for this method to enter the athletic arena is difficult to estimate, but it is most likely that this will happen within 5 years. So, athletes may be able to use gene doping to re-engineer their bodies for better performance, and many genes have the potential to enhance athletic performance, depending on what the athlete wants and what physical aspects they are stronger in such as aerobic and anaerobic activities, or what muscle fibre types they are. But clearly the benefits are very positive particularly on a large scale as it is available to all athletes. Gene doping can also be used as well to identify an athlete's genetic make-up so coaches can see where they are likely to be stronger and what training needs to be done, as I explained earlier. Finally, the fact that gene doping can also be used in the matter of injuries in sport as injury healing may be improved by gene therapy because the recovery process can be speeded up in the longer term and muscle atrophy can be decreased. At the moment gene doping is very experimental but as science and technology develops this is the next step for ergogenic aids in sport, particularly in the long term as the genes will take place within 5 years in order to make a better engineered athlete. ...read more.