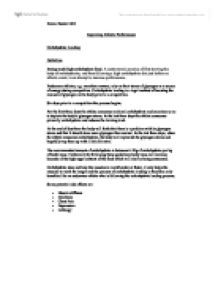 Blood doping has several side effects including kidney damage, jaundice and blood clotting. From the process of re-injection it can also cause infection and lead to heart problems. Use of creatine monohydrate Creatine monohydrate is the most popular and effective bodybuilding supplement. Our bodies naturally make the compound of creatine, which is used to supply energy to our muscles. It is produced in the liver, pancreas, and kidneys, and is transported to the body's muscles through the bloodstream. Once it reaches the muscles, it is converted into phosphocreatine (creatine phosphate). This high-powered metabolite is used to regenerate the muscles' ultimate energy source, ATP (adenosine triphosphate). One function of creatine is that it replenishes ATP, the more creating that is present in muscle cells, up the maximum storage level, the more efficiently ATP can be replenished and hence more ATP is available for energy. Therefore by supplementing creating phosphate stores with creating monohydrate energy stores can be maximised. Giving you more energy to carry out the athletic activity. ...read more.

Altitude Training As scientists have consistently pointed out, training at altitude usually leads to decreased power outputs (slower running speeds, more lethargic cycling velocities, etc.) during workouts, leading to smaller gains in fitness, compared to training at sea level - where higher training intensities are easier to attain. The longer term changes are 1. A decrease in maximum cardiac output a decreased maximum heart rate 2. An increased number of red blood cells 3. Excretion of base via the kidneys to restore acid-base balance. (Unfortunately, the net result is that you have less tolerance for lactic acid.) 4. A chemical change within red blood cells that makes them more efficient at unloading oxygen to the tissues. 5. An increase in the number of mitochondria and oxidative enzymes Problems at working at high altitudes include the lack of oxygen. Until you have fully adapted, it will reduce your ability to work hard. Moving from low altitude to high altitude and the low concentration of oxygen in a person's blood immediately stimulates breathing depth and rate to increase up to 65%. If they remain at high altitude for several days their ventilation rate may increase up to 500%. ...read more.