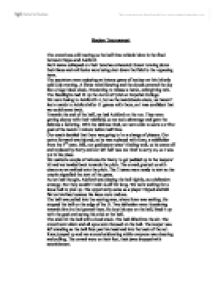 Hockey Tournament The crowd was still roaring as the half time whistle blew in the final between Hayes and Ashford. Both teams collapsed on their benches exhausted. Sweat running down their faces and evil looks were being shot down the field to the opposing team. The spectators were enjoying an intense game of hockey on this bitterly cold July evening. A fierce wind blowing and the clouds covered the sky like a huge black cloak, threatening to release a harsh, unforgiving rain. The floodlights had lit up the Astroturf pitch at Imperial College. We were losing to Ashford 2-1, but as the matchbooks show, we haven't lost a match to Ashford after 11 games with them, so I was confident that we could come back. ...read more.

We waited a couple of minutes for Barry to get padded up in the keepers' kit and we headed back towards the pitch. The crowd greeted us with cheers as we walked onto the pitch. The 2 teams were ready to start as the umpire signalled the start of the game. As we had thought, Ashford was playing the ball tightly, as a defensive strategy. But they couldn't hold us off for long. We were waiting for a loose ball to pick up. The opportunity came as a player tripped and fell flat on his face because his laces were undone. The ball was pelted into the scoring area, where Kam was waiting. ...read more.

A foul by Ashford shortly after centre ball had been taken was going to be our last chance to score before the final whistle. The free hit had been taken by Harry, but it wasn't aimed properly. It went towards the left of the goal. I ran for the ball and flicked it just as it reached the line. It landed in front of the goal and Kam gave it a soft touch to help it into the goal. And there it was, the final whistle. We walked back into the changing rooms where everyone was yelling and running around. We came out of the changing rooms to a reception from our supporters congratulating us. We were given a trophy and medals for our brilliant performance throughout the tournament. ...read more.