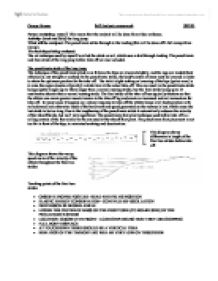 Person analysing: myself. This means that the analysis will be done from video evidence. Activity:(track and field) the long jump

The free limb is a major part of technique in balancing the tendency to over-rotate in a forward movement about the centre of gravity (the pelvic region).(This shown in the diagram below) The feel of the take-off should be both forward and up. The athlete's eyes should be focused on the rear of the pit. While this is happening the take off foot should be doing rolling action onto to the ball and then the toes of the foot to give maximum vertical lift.(the full foot placement is shown below of how it should look)The athletes takeoff foot should strike the board on the midline, the foot should be at a right angle to the edge of takeoff board. The Takeoff (last) Step teaching points: o Should exhibit a rolling contact of the foot. o The foot placement should not occur too far in front of the body, so that breaking is minimized. o Should not be rushed, as in pecking or slapping at the board. o The foot should be at 90degrees to the leg o A powerful drive of the free leg o The athlete should only begin to rise/takeoff after the center of mass has passed the takeoff board. ...read more.

The teaching points of stride technique and landing: 1. The free leg is driven into a position parallel with the ground with the foot held up, creating the stride position. 2. The good upright body position is held for as long as possible. 3. The arm which is back at drive off is brought through high to join the forward arm above head height. 4. The arms then come down together close to the side of the body, while both legs are held out in front of the body for as long as possible. 5. The arms come through at point of impact to encourage the Centre of Gravity to go forward and over the landing feet 6. The feet then naturally drop under the body, and a standing position results. 7. The back is arched as the heels touch the sand and then collapse or skid through the knees. The circumstances: The practice, which has been setup to analysis the technique stated above, is an indoor competition. This will use all the compete ion rules of the long jump. What the practice consists of is running along a runway and then jumping into a sand pit at the end of it. 16 full jumps will be looked at to produce the overall analysis. ...read more.