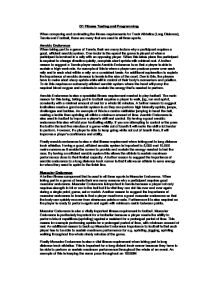 Fitness Testing and Programming. When comparing and contrasting the fitness requirements for Track Athletics (Long Distance), Tennis and Football, there are many that are used in all three sports.

D1 Fitness Testing and Programming When comparing and contrasting the fitness requirements for Track Athletics (Long Distance), Tennis and Football, there are many that are used in all three sports. Aerobic Endurance When taking part in a game of Tennis, their are many factors why a participant requires a good, efficient aerobic system. One factor is the speed the game is played at when a participant is involved in a rally with an opposing player. When this takes place the participant is required to change direction quickly, complete short sprints with minimal rest. A further reason to suggest a Tennis player needs Aerobic Endurance is so that a player is able to sustain a high work rate. An example of this is when a player can produce power over each rally and in each shot within a rally on a consistent basis. ...read more.

Aerobic Endurance is also used in football to improve a player's skill and control. By having a good aerobic endurance this also will aid your footballing ability. If you are attempting to control or the pass the ball in the last five minutes of a game while out of breath it will make the skill a lot harder to perform. However, if a player is able to keep going while not out of breath then, it will improves a player's confidence and ability. Finally aerobic endurance is also a vital fitness requirement when taking part in long distance track athletics. Having a good, efficient aerobic system is important to 5,000 and 10,000 metre runners as it enable the runner to provide and sustain the energy needed to last the race. By having an efficient aerobic system this allows the athlete to sustain maximum performance close to their limited capacity. ...read more.

Muscular Endurance is also a vitally important fitness requirement in football. Muscular Endurance is particularly important for a footballer because a player needs the ability to perform lots of repetitions (sprinting) against a resistant for a prolonged period of time. This means for example performing sprints for a prolonged period of time, with minimum amount of rest. An additional reason to back up Muscular Endurance importance to football is that each player has to be able to sustain maximum performance for e.g. sprinting, jogging, sprinting walking throughout the whole ninety minutes of the game. Finally Muscular Endurance is also a vital fitness requirement when taking part in long distance track athletics. This is important for a long distant track runner because they have to be able to perform or sustain maximum performance throughout the whole of an event. An example of this is keeping the same pace throughout an 10000M ?? ?? ?? ?? ...read more.