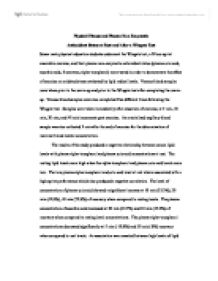 Physical Fitness and Plasma Non-Enzymatic - Antioxidant Status at Rest and After a Wingate Test.

Physical Fitness and Plasma Non-Enzymatic Antioxidant Status at Rest and After a Wingate Test Seven male physical education students underwent the Wingate test, a 30 sec sprint anaerobic exercise, and their plasma non-enzymatic antioxidant status (plasma uric acid, ascorbic acid, �-carotene, alpha-tocopherol) were tested in order to demonstrate the effect of exercise on oxidated stress evaluated by lipid radical levels. Venous blood samples were taken prior to the warm-up and prior to the Wingate test after completing the warm-up. Venous blood samples were also completed five different times following the Wingate test. Samples were taken immediately after cessation of exercise, at 5 min, 10 min, 20 min, and 40 min increments post exercise. An arterialized capillary blood sample was also collected 3 min after the end of exercise for the determination of maximal blood lactate concentration. The results of the study produced a negative relationship between serum lipid levels with plasma alpha-tocopherol and plasma uric acid concentrations at rest. The resting lipid levels were high when the alpha-tocopherol and plasma uric acid levels were low. The low plasma alpha-tocopherol and uric acid level at rest where associated with a high sprint performance which also produced a negative correlation. ...read more.

C. Two main limitations or weaknesses of this study include the factors of nutritional status and physical fitness status of the subjects. The nutritional intake of the participants were not monitored or standardized in the weeks prior to the study. The only guideline prescribed in regards to food intake of the subjects was to eat a standardized breakfast which contained 55% carbohydrates, 15% proteins, and 30% lipids 2 hours prior to the start of the test. The resting antioxidant levels found in this study were near the lower limits of the normal range and the individual differences in their diets may have had an influence on the plasma antioxidant status. Further more, the criterion for physical fitness status in this study was that subjects were active (approximately 14h/wk of various sport activity for at least 2 years) but they were not involved in regular athletic training (endurance or sprint). The level of physical fitness may have also influenced the antioxidant status and the individual differences for fitness status may have also been a contributing factor to antioxidant status. D. The major finding of this study demonstrates an association with acute changes in non-enzymatic plasma antioxidant status and 30 sec ergocycle sprinting. ...read more.

The researchers suggested, based on the results of this study along with the existing body of knowledge in this area, that athletes intake of antioxidants play an important role in maintaining plasma antioxidant concentrations within the normal range and protecting against acute or chronic exercise induced oxidative stress. E. Overall, I feel that this study was well constructed, conducted and analyzed as well as bringing novelty to the field of nutrition with research in regards to anaerobic exercise and antioxidant status. If I had to perform this study the features that I would change deal with previously stated limitations or weaknesses of this study. The level of training one possesses has an influence on the plasma antioxidant status. To try and control the level of variability between individuals, I would choose subjects of the elite athlete status in an attempt to create homogeneity among the subject's physical fitness level. Another aspect that I would try to control as a researcher in this study would be the nutritional intake of the participants for several weeks preceding the testing. A highly specific diet would include the caloric intake that the individual were to consume for several weeks with instruction to refrain from any nutritional supplement including vitamins or minerals in order to modify the resting plasma antioxidant status. ...read more.