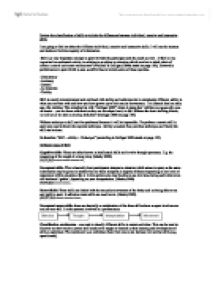 Review the classification of skills to include the differences between individual, coactive and interactive skills.

Review the classification of skills to include the differences between individual, coactive and interactive skills I am going to find out about the different individual, coactive and interactive skills. I will use the internet and books to find the majority of information. Skill is a very important concept in sport for both the participant and the coach as well. A Skill is "An organised co-ordinated activity in relation to an object or situation which involves a whole chain of sensory central and motor mechanisms" (Welford in Galligan (2000) stated on page 102). However a performance in sport which is seen as skilful has to include some of these qualities. -Consistency -Accuracy -Control -An intention -Fluidity Skill is usually misunderstood and confused with ability and technique but is completely different, ability is what you are born with and how you have grown up to link concise movements. It is learned from an early age, like walking. This is backed up with "Galligan 2000" where it states that "Abilities are generally seen as innate... ...read more.

This can be used to discover out how much a certain skill needs to be taught or learned so that learning and development of skills is optimised. The continuum is an unbroken chain from one to ten between two similar skills (e.g. open/closed). Open-Closed continuum - it is Barbra Knapp's theory of classification. She proposes that "Skill can fit on a continuum between open and closed." (Galligan 2000 on page 104) Open Skill - is performed in an unpredictable environment, has external requirements and needs the performer to be conscious of what is around them. Closed Skill - is performed in a predictable environment, has no external requirements and doesn't need the performer to be aware of surroundings. It is the exact opposite of an open skill. (Full attention on skill). v Individual: Tennis Serve Open Closed Self Paced - is timed by the performer like in cycling. Externally Paced - is timed by someone else like the gun shot in the 100m sprint. ...read more.

Sports like football, basketball and rugby all contain direct confrontation. (Galligan 2000) This is an interaction continuum showing practical examples: Individual___________________________Coactive__________________________ Interactive Golf 100 metres sprint Football Performed individually Sprinters performing alongside Players physically One at a time each other but not physically confronting each other Influencing each other Skills can be classified in a number of ways: Skill Classification Diving Football shooting at goal Badminton Return of Serve Gross Yes Yes Fine Yes Open Yes Yes Closed Yes Self Paced Yes Yes Yes Externally Paced Discrete Yes Yes Serial Yes Continuous Individual Yes Coactive Interactive Yes Yes From the table above you can see how skills are classified in a number of ways. Some of the skills shown can be fine or gross. For diving it could never be fine but a badminton return of serve could be gross as the player has to move a lot to return the serve and if he/she tried smashing then it would be gross. Badminton return of serve could also been closed because if the player had practiced returns of serve so much then she/he wouldn't really need to make an effort like you would if it were open. ...read more.