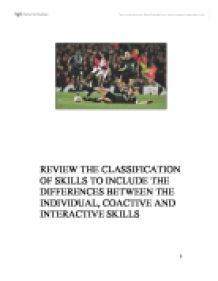 Review the classification of skills to include the differences between the individual, coactive and interactive skills

REVIEW THE CLASSIFICATION OF SKILLS TO INCLUDE THE DIFFERENCES BETWEEN THE INDIVIDUAL, COACTIVE AND INTERACTIVE SKILLS Introduction Definitions of skill 'An act or a task that has a goal to achieve and that requires voluntary body or limb movements to be properly performed' (By R Magill, Motor learning: Concepts and Applications) Skill is seen as a coordinated act, involving complex movements brought together in a consistent and smooth manner. We have different interpretations of what constitutes a skilful movement as analysis is often based on our own experiences and performances. It's also used to be defining the level of performance of an individual or team, a football team may play at district level or an athlete may be a good club runner and their respective performance may be judged as skilful or not (Gallian, etal / 2000) In order to differentiate motor skills from verbal skills, there are 4 different types of skill: Cognitive/intellectual skills: Skill involve thought processes (e.g. adding up of judges' scores in ice skating) Perceptual skills: Skills involve interpretation of stimuli and making sense of information coming in via the senses. (e.g. shooting) Motor skills: Skills involve smoothly executing physical movements and responses (e.g. running) Perceptual motor skills: Skills involve cognitive skills/thought, perceptual skills/interpretation, and motor skills/movement. ...read more.

Practiced as a whole 5. Cannot be broken into sub-routines 6. Would lose the flow of movement if broken down 7. There is need for kinaesthetic awareness of the whole skill. Series skills 1. Series skills are made up of a number of discrete or continuous skills put together to make a sequence or series 2. The order the distinct elements are put together is very important 3. Each movement is both a stimulus and response Example of the discrete skills: A basketball free throw is the example of the discrete because it is obviously a separate element of the game. Examples of the continuous skills: Swimming and running are continuous as each step flows into the next and it don't have clear beginning and e Example of the series skills: Javelin throw is a series skills because it combines a number of discrete (throwing a javelin) and continuous skills (running). Knapp's open-closed continuum Open skills 1. The environment is unpredictable. 2. Movement patterns must be adapted to suit the demands of situation 3. An open skill has no definite beginning and end 4. The performer is not in full control of a skill. 5. An open skill is not predominantly habitual. Closed skills 1. The environment is predictable 2. A closed skill has a pre-learned pattern of movement 3. ...read more.

We can serve the shuttle in own time, own place and has own routine Gross/fine Can be fine or gross 1. It can be gross/fine because we can hit a shuttle strongly/softly. Organization Discrete 1. a obviously beginning/end Open/closed Open 1. Defender techniques to achieve the same of serving. Interactive/ co-active/individual Individual 1. Two players do not serve the shuttle . . . together one serve one receive. The above continua are shown in one representation of a skill to build a profile of the skill requirements And the Individual and coactive skills require concentration and often performance of a pre-learned sequence of movements. Interactive skill requires interpretation and variation depending on the situation. An obvious link can be drawn between these open-closed skills. (Gallian etal, 2000) Conclusion In conclusion, it can be seen that there are 4 ways of categorizing skills; there are Pacing continuum, Gross/fine continuum, Discrete/continuous/series, and Knapp's open-closed continuum. By extending the specific classifications further into individual/coactive/interactive groupings skills can be further understood. This understanding provides us with the knowledge to plan training sessions to analyze movements and game plans and to structure practise to further enhancing techniques. In addition, a coach will be able to select the suitable starting point for a learner and the detection and solving of any problems the learner may be facing is made easier, while not exhaustive and computerises skill classification and the use of continua are fundamental to the understanding of spirit performance. ...read more.