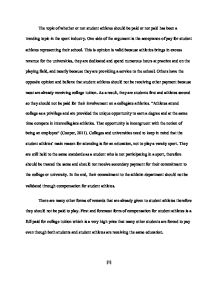 Should American student athletes be paid? One side of the argument is the acceptance of pay for student athletes representing their school. This is opinion is valid because athletics brings in excess revenue for the universities, they are dedicated and sp

The topic of whether or not student athletes should be paid or not paid has been a trending topic in the sport industry. One side of the argument is the acceptance of pay for student athletes representing their school. This is opinion is valid because athletics brings in excess revenue for the universities, they are dedicated and spend numerous hours at practice and on the playing field, and mostly because they are providing a service to the school. Others have the opposite opinion and believe that student athletes should not be receiving other payment because most are already receiving college tuition. As a result, they are students first and athletes second so they should not be paid for their involvement on a collegiate athletics. "Athletes attend college as a privilege and are provided the unique opportunity to earn a degree and at the same time compete in intercollegiate athletics. That opportunity is incongruent with the notion of being an employee" (Cooper, 2011). Colleges and universities need to keep in mind that the student athletes' main reason for attending is for an education, not to play a varsity sport. They are still held to the same standards as a student who is not participating in a sport, therefore should be treated the same and should not receive secondary payment for their commitment to the college or university. In the end, their commitment to the athletic department should not be validated through compensation for student athletes. ...read more.

This example justifies what I was talking about within rewarding the athletes with education and was a clear example. Their education is the first priority and that is already being paid for. Being able to go to school without having to worry about how your tuition, housing and meals are going to be paid for is a great feeling and puts them financially in a better situation than other students. There are plenty of other students out there who got into college and didn't get the financial aid they thought they were going to receive and have to take out huge student loans that are going to put them in financial debt for while once they graduate college. These athletes will have all of their school paid for and will have a chance to land a multi-million dollar job from a professional sports team. Then there are other students who are working two jobs to help pay for books, food and a place to live and are just getting by all while juggling the trouble of doing well in school. All student athletes have to worry about is going to practice, their school work and playing well in their games and no worries whether or not they can afford to stay in school. There are many other benefits that come with receiving an athletic scholarship. Besides their education being paid for, student athletes are also being compensated with free amenities such as housing, meals, textbooks, equipment and special priority with classes. ...read more.

Meaning in the fall baseball players can work on campus and come spring when baseball season starts the football players can take their jobs because they are in their offseason. Rotating jobs between student athletes like this is not an issue because during their respective season, they will need to be focused on playing and classes whereas during their offseason they can focus on holding a job and going to class. This is another way universities can compensate their student athletes without budgeting a salary for players and working around given out equal payments to all of its student athletes. The argument of whether or not student athletes should or should not be paid for play brings up alternating opinions. Coming from an athletes' perspective they see their service to the team as a money making method through the dedication, commitment, and athletic abilities they provide for the school. Therefore they feel as though they should be equally compensated for their services. On the other hand, you have those who believe that they signed their letter of commitment to their school in return for a free education and added life experiences, and that is enough of an exchange that they do no need to be rewarded with payment of play. Their education can bring them a lot farther in life than their athletic abilities; therefore, academics should take precedence over athletics. Student athletes should not be paid just because college is an educational institution not an athletic company so their first and primary focus should be on class rather than playing a varsity sport. ...read more.