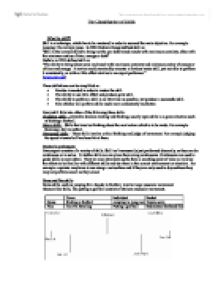 The Classification of Skills.

The Classification of Skills What is skill? Skill is a technique, which has to be mastered in order to succeed the main objective. For example jumping 11m in triple jump. In 1963 Barbara Knapp defined skill as: "Skill is the learned ability to bring out the pre-determined results with maximum certainty, often with the minimum outlay of time, energy or both" Guthrie in 1952 defined skill as: "The ability to bring about some end result with maximum certainty and minimum outlay of energy or of time and energy. A novice could convincibly execute a flawless motor skill, yet not able to perform it consistently, or with as little effort relative to an expert performer." (www.exrx.net) These definitions can be simplified as: * Practise is needed in order to master the skill. * The ability to use little effort and produce great skill. * The ability to perform a skill in as little time as possible, yet produce a successful skill. * Elite athletes will perform skills much more consistently and better. ...read more.

However closed skills are not affected by the environment and have predictable outcomes as they are said to be predominantly habitual. Team Individual Racket Open Hockey shot Dart throw Squash drive Closed Hockey penalty Discus Badminton serve Externally And Self-Paced When a skill is self paced it is the ability to control the rate of action an athlete may wish to perform at. However when a skill is externally paced the athlete is reacting to either their surroundings or environment, the performer isn't in control of the pace. Externally paced skills can be affected by several factors such as the weather or wind conditions. The opposition is also a factor in that they may be in control of the play and therefore they are self-paced. Team Individual Racket Externally paced Yachting Surfing Receiving a tennis serve Self Paced Football passing Triple jump Badminton smash As you can see yachting is more externally paced than weight lifting because it has stronger variables such as the weather and wind, whereas the athlete controls weightlifting and doesn't involve any environmental factors. ...read more.

This allows the athlete to become as prepared as they can be for their event although they do have their disadvantages. For example they can vary due to the type of environment, such as the type of surface, weather or even how experienced the athlete is. It can be argued that as a performer becomes better at a skill they will begin to, unknowingly begin to inter-link one skill into another. As most skills are interlinked they can be illustrated as a profile, shown below; A Skill profile of a Netball standing shot: Each line represents the previous continuums mentioned earlier. However, a major criticism regarding profiles is that it will vary from athlete to athlete depending on their ability. For example a professional netball player will find many of the skills far easier with experience and practise. A typical skill profile for an elite netball player could be shown as below: As you can see the more experienced athlete would find the skill far easier to do due to the sheer practise they have had. Another criticism is that the more advanced athletes will be able to control their pace within a game situation, much better than an amateur will. ...read more.