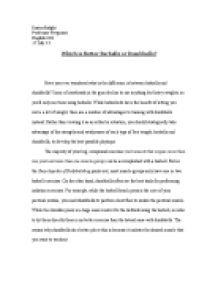 Which is Better Barbells or Dumbbells?

﻿Karim Rafghi Professor Ferguson English 090 17 July 12 Which is Better Barbells or Dumbbells? Have you ever wondered what is the difference is between barbells and dumbbells? Some of meatheads in the gym decline to use anything but heavy weights, so you'll only see them using barbells. While barbells do have the benefit of letting you move a lot of weight, there are a number of advantages to training with dumbbells instead. Rather than viewing it as an either/or situation, you should strategically take advantage of the strengths and weaknesses of each type of free weight, barbells and dumbbells, to develop the best possible physique. The majority of your big, compound exercises (movements that require more than one joint and more than one muscle group) ...read more.

Have you ever-performed dumbbell bench presses and noticed how your hands move? Your palms don't stay pointed straight toward your legs, but rotates somewhat in. The barbell bench-press, meanwhile, locks your arms into a certain path that puts strain on your wrists, elbows and shoulders. According to The Encyclopedia of Bodybuilding examined the chest routine of some of the world's best bodybuilders, and found out that they have eliminated the barbell bench press in favor of the dumbbell bench press to spare their joints. World renounced bodybuilder Jay Cutler explained that while he got very strong doing the barbell bench press, it was dumbbells that increased his pectoral size because he can achieve greater range of motion compared to barbells. ...read more.

Dumbbells also develop strength in the small, balancing muscles rather than just the large, impressive muscles. The Encyclopedia of Bodybuilding explains that this is one reason why people who exercise with dumbbells suffer fewer injuries than those who don't. Don't swear off barbells forever, because there's one very important way in which barbells beat dumbbells: the development of raw strength. Schwarzenegger explains that the bulk of your muscle will be built primarily with heavy, compound barbell exercises. Barbells allow you to forget so much about balancing and go all-out; lifting far more weight than you could with dumbbells. Next time you are in the gym and you are looking at the barbell just remember that barbells can be very beneficial weightlifting equipment for massive strength gains But to have extreme gains in size then the dumbbells are the key. ...read more.