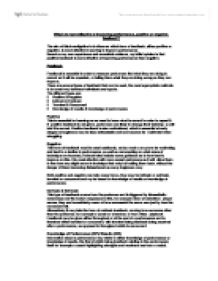 Which is more effective at improving performance, positive or negative feedback?

Which is more effective at improving performance, positive or negative feedback? The aim of this investigation is to discover which form of feedback, either positive or negative, is most effective in serving to improve performance. Based on my own experience and anecdotal evidence, my initial opinion is that positive feedback is more effective at improving performance than negative. Feedback Feedback is essential in order to reassure performers that what they are doing is correct so it will be repeated, or telling them what they are doing wrong so they can improve. There are several types of feedback that can be used, the most appropriate methods to be used vary between individuals and sports. The different types are; * Positive & Negative * Intrinsic & Extrinsic * Terminal & Concurrent * Knowledge of results & knowledge of performance Positive This is essential for learning as we need to know what is correct in order to repeat it. If positive feedback is not given, performers are likely to change their technique until told it is correct. Positive feedback is also motivational, which is essential at early stages as beginners may be less enthusiastic and can become de-motivated when struggling. ...read more.

KR is the method most performers are thought to prefer and deem more relevant as it is more immediately obvious, and allows them to gauge their success. However, KP is becoming more valued amongst more elite performers as it allows them to understand the results they have received, for example a sprinter may watch video footage of a race that may aid them in identifying errors in technique which, when improved upon may help to improve their time. KR alone, however much it is valued, is not enough to improve performance as it does not serve to identify why performers have received the score, time or position they have. It is also thought that feedback alone is not enough, and requires reinforcement to be at its most effective. Reinforcement Reinforcement is a form of feedback that is required to allow a performer to develop. It is aimed at building on the positive elements of an performance and eliminating the negative. Reinforcement may be anything that increases the likelihood of a performer repeating a skill, movement or overall performance. It can take four main forms; * Positive * Negative * External * Internal As with feedback, the most appropriate form of feedback to use is dependant on the performer, the environment and the activity being undertaken. ...read more.

to de-motivate the performer, also most feedback would be external as their skills are not developed enough to rely upon intrinsic feedback, also there would be no use of KP or KR as the performer would be unlikely to have any interest at an early stage. In contrast to this, an expert badminton player would require more negative feedback so as to make them aware of any errors in technique, without the risk of de-motivating them Despite having a highly developed intrinsic feedback system, they may also require extrinsic feedback in the form of video playback to perfect slight errors in technique to further improve performance. To further investigate and prove my findings, my next step would be to conduct a practical investigation involving two separate groups of performers, both of equal ability. I would begin by having them perform a series of skills, with one group receiving only positive feedback and the other receiving only negative feedback, they would then repeat their previous activity and I would then gauge whether either group made any significant improvements. Also, another way of gathering further research would be through a questionnaire to gauge peoples opinions on what type of feedback they prefer and find most beneficial to them. ...read more.