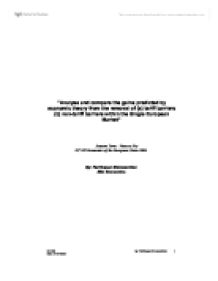 Though quotas (NTBs') impose a limit on international goods and increase the market share for domestic firms; it leads to rising prices on their goods and services within the affected member country to make up for the potential earnings that are lost through the restriction to cover their costs. Smaller countries in particular suffer and become victims due to the implementation of policies such as these. In order to eradicate this problem the EC created the Customs Union which is an area of free trade with common external tariff (Imports into the customs union pay the same level of tariff regardless of point of entry). Though it doesn't mean the complete removal of tariffs and non-tariff barriers but an area were the costs are reduced and goods can be traded without any sort of restriction. A good example of this would be the "Cassis de Dijon"II case which established the principle of mutual recognition. In this the European Court of Justice (ECJ) ruled that Germany were not entitled to ban the importation of Cassis de Dijon, an alcoholic drink from France, on the grounds that it did not conform to the German rules and regulations governing the sale of the product. It went on to saying that products or services that adhered to the national rules and regulations in the member country where they were produced should ...read more.

If the production factors in the union are not fully occupied, protection can turn local demand towards domestic goods so that more labour is put into work hence social costs can be avoided. We can also ease our balance of payment problems by staying out of the EU. Import restrictions reduce the amount to be paid abroad, which helps to avoid adjustments of the industrial structure and accompanying social costs and societal friction in form of wage reduction and so on. Despite of all the reasons mentioned above we cannot deny the importance of the removal of the barriers in the single market. Too much nurturing of firms from competition with other member countries result in them becoming inefficient and a decrease in production levels. All in all the single market is in the process of becoming a huge market for the European businesses and therefore all forms of barriers should be removed in an attempt to aid them. Another benefit according to the theory of trade is product differentiation. Once the barriers are removed trades can take place between the different markets within the member countries. It is believed (according to the theory) that the endowments of inputs of the various markets would be identical. But this contradicts with the theory of comparative advantage; saying that consumers prefer a wider choice of goods and services which will make them better off. ...read more.