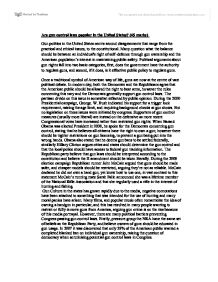 Are gun control laws popular in the United States?

Are gun control laws popular in the United States? (45 marks) Gun politics in the United States centre around disagreements that range from the practical and ethical issues, to the constitutional. Many question what the balance should be between an individual's right of self-defence through gun ownership and the American population's interest in maintaining public safety. Political arguments about gun rights fall into two basic categories, first, does the government have the authority to regulate guns, and second, if it does, is it effective public policy to regulate guns. Once a traditional symbol of American way of life, guns are now at the centre of vast political debate. In modern day, both the Democrats and the Republicans agree that the American public should be allowed the right to bear arms, however the rules concerning this vary and the Democrats generally support gun control laws. The partisan divide on this issue is somewhat reflected by public opinion. ...read more.

Gun Culture in the states has grown rapidly due to the media, negative connotations have been attached to something that was intended for the use of hunting and many moral panics have arisen. Many films, and popular music often romanticize the idea of owning a handgun in particular, and this has resulted in many people wanting to restrict or fully remove guns from America, arguing gun crime is on the rise because of this media portrayal. However, there are many political barriers preventing Congress passing gun control laws. Firstly, pressure group the NRA have the same set of beliefs as the Republican Party, and believe owners of guns should be educated in gun usage. In 2007 it was discovered that only 28% of the American public wanted a completed blanked ban on individual gun ownership, raising the question of democracy when scrutinising potential gun control laws in Congress. ...read more.

In comparison to other modern Westernised countries, America appears to be fairly tolerant concerning the owning of a gun. With only 28% of the public arguing to completely ban guns proves that gun control laws are not very popular. The National Rifle Association has 3million members, and the Republican party argue that gun control laws are not always necessary and state that the 'fun' should not be removed from sports such as hunting. However, the Democrats argue with recent gun-crime disasters such as the Virginia-Tech shootings, tighter restrictions should be introduced and gun laws should be tackled at a Federal level, Similarly the more liberal amongst the American public may argue a modern update is necessary of the II amendment. With guns becoming the centre of not only a political controversy, but also a media and ethical issue, many would say it would be hard to categorize the American opinion as a whole on such a large issue. ?? ?? ?? ?? ...read more.