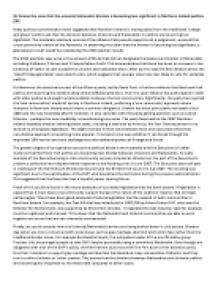 Assess the view that the unionist/nationalist division is becoming less significant in Northern Ireland politics.

Transfer-Encoding: chunked ﻿(b) Assess the view that the unionist/nationalist division is becoming less significant in Northern Ireland politics. [26] Many political commentators have suggested that Northern Ireland is moving away from the traditional ?orange and green? politics and that the divisions between Unionists and Nationalists in politics are becoming less significant. The moderate electoral success of the Alliance Party would support such a judgement, as would the cross-community nature of the Assembly. In examining the claim that the division is becoming less significant, a good place to start would be considering the 2016 election results. The 2016 elections saw a rise in the amount of MLAs that did not designate themselves as Unionist or Nationalist, including 8 Alliance, 2 Green and 2 People Before Profit. This demonstrates that there has been an increase in the tendency of voters to vote outside the unionist and nationalist blocs. After all, this was the first election where the ?Good Friday generation? were able to vote, which suggests that younger voters are less likely to vote for sectarian politics. Furthermore, the electoral success of the Alliance party, led by David Ford, is further evidence that Northern Irish politics are becoming less divided along Unionist/Nationalist lines. ...read more.

Even though she disagreed with a lot of the DUP?s policy, she felt that she could not vote Sinn Fein due to their abortion policy. Sinn Fein?s decision to support gay marriage and abortion has alienated many conservative Catholics, and they turn to either Unionist or ?other? parties. This proves that the divisions between Nationalists and Unionist politics are becoming less important to the electorate compared to other issues. On the other it could be argued that the unionist/nationalist division is still central to Northern Ireland politics. The DUP and Sinn Fein remain the largest parties, and although the amount of ?other? designated MLAs has increased they still only make up 12 out of a total 108. This is partially due to an apathetic electorate. The turnout was only just above 50% in 2016, and most of those who do not vote are moderates. There are many issues that still divide Northern Irish politicians along unionist/nationalist lines. This is evident in the controversy that surrounds Irish Language. Sinn Fein believe that they secured an Irish Language act in the St Andrew?s Agreement of 2006. However, this has yet to materialise because even if it was introduced it would never generate the cross-community support needed to pass it. ...read more.

It goes without saying that the Unionists are in favour of flying the Union flag all year round, whereas the Nationalists would prefer it to be taken down. This gridlock approach fails to deal with the major issues and international mediators must be brought in, such as when Haass came over from America. Haass sat down with all the parties in an intense set of negotiations and discussed issues ranging from flags to parades. It was hoped a blueprint would emerge for future agreement. However, the deadlines were not met nor the negotiations fruitful. Haass has criticised Northern Ireland for not moving on in to a shared future. The failure of the talks led to recriminations and have cast a shadow over the future and called the effectiveness of the DUP and Sinn Fein led executive into question. This suggests that the unionist/nationalist division is still central to Northern Ireland politics. To conclude, the unionist/nationalist division is becoming less significant in Northern Ireland politics but it certainly hasn?t disappeared altogether. With each passing generation it will likely become less significant, because younger voters have not lived through the troubles and tend to be more concerned with contemporary social issues. For now, however, it seems that the division is here to stay as long as issues such as flags and parading exist. ...read more.