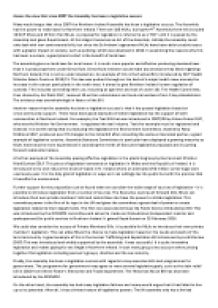 Transfer-Encoding: chunked ﻿Assess the view that since 2007 the Assembly has been a legislative success Many would argue that since 2007 the Northern Ireland Assembly has been a legislative success. The Assembly has the power to make laws for Northern Ireland. There are 108 MLAs, during the 4th Assembly there this included 38 DUP MLAs and 29 Sinn Fein MLAs. A proposal for legislation is referred to as a ?Bill? until it is passed by the Assembly and given Royal Assent. At this stage it becomes an Act of the Assembly. Initially the assembly could only deal with non-controversial bills, but since the St Andrew?s agreement MLAs have been able to tackle issues with a greater impact on society, such as policing, which was devolved in 2010. In examining the reasons why this has been a success, a good place to start is the benefit of local laws. The assembly gives us local laws for local issues. It is much more popular and effective producing devolved laws than it is producing them under Direct Rule. Direct Rule ministers could make any decisions they liked regarding Northern Ireland; this is not so under devolution. An example of this is the Sunbed Bill, introduced by DUP Health Minister Edwin Poots on 2010/11. ...read more.

It was successful. It is quite innovative legislation and makes paying for s*x illegal in Northern Ireland. It took many groups into account when piecing together this legislation including women's groups, charities and the s*x industry. Finally, the assembly has been a legislative success with regards to key executive bills and programmes for government. The programme for government may agree to meet several legislative goals, such as the debt relief bill in 2010 from Arlene Foster?s Enterprise and Trade department. The Historical Abuse Bill has also been introduced by the OFMdFM. On the other hand, the assembly has had many legislative failures and many would argue that it has failed to live up to its potential. After all, it has a limited nature of legislative powers. The NI assembly only has a limited amount of powers, because not all are devolved. Taxation for example is controlled by Westminster which leaves them holding the purse strings and therefore key levels of power. An example of this was the threat of water tax being introduced from Westminster, and the debate that surrounded Corporation Tax. Many attempts to pass legislation in the Northern Ireland Assembly end in gridlock. While there has been co-operation on some legislation, there is also the case that gridlock can easily paralyse the system in Northern Ireland when contentious issues lead to friction and fallout. ...read more.

Conscience Clause and Jim Allister?s (TUV) SPAD bill. One good one that was rejected was Dawn Purvis? (PUP) Double Jobbing Bill which was rejected by the larger parties. Furthermore, committee bills have only been used once. Many MLAs complain of little time to initiate legislation. This gridlock approach fails to deal with the major issues and international mediators must be brought in, such as when Haass came over from America. Haass sat down with all the parties in an intense set of negotiations and discussed issues ranging from flags to parades. It was hoped a blueprint would emerge for future agreement. However, the deadlines were not met nor the negotiations fruitful. Haass has criticised Northern Ireland for not moving on in to a shared future. The failure of the talks led to recriminations and have cast a shadow over the future. This failure to work together, as evidenced by the Haass talks, has meant that the gridlock prevents passing legislation on controversial issues such as education and Irish language. To conclude, the assembly has been somewhat of a legislative success. It has been a gradual progression with legislative powers devolving slowly. However, we should consider whether the petition of concern is still necessary. It maintains the veto of DUP and Sinn Fein, and the continued differences between parties show deadlock will remain in many areas as emphasised in the Fresh Start Agreement. ...read more.