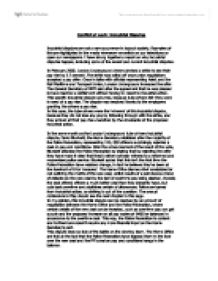 Conflict at work: Industrial Disputes Industrial disputes are not a rare occurrence in today's society. Examples of this are highlighted in the media whenever we switch on our televisions or open our newspapers. I have strung together a report on why industrial disputes happen, including some of the recent and current industrial disputes. In February 2002, London Underground drivers devised a strike to see their pay rise by 5.7 percent. The strike was called off once union negotiators accepted a pay offer. Once in talks with officials representing Aslef, and the Rail Maritime and Transport Union, London Underground increased the offer. The General Secretary of RMT said after the agreement that he was pleased to have reached a settlement without having to resort to industrial action. This specific industrial dispute occurred, because tube drivers felt they were in need of a pay rise. The dispute was resolved thanks to the employers granting the drivers a pay rise. In this case, the tube drivers were the 'winners' of this industrial dispute, because they did not lose any pay by following through with the strike, and they arrived at their pay rise unscathed by the drawbacks of the proposed industrial action. In the same month as the London Underground tube drivers industrial dispute, David Blunkett, the Home Secretary retaliated after the majority of the Police Federation, representing 125, 000 officers surprisingly rejected a deal on pay and conditions. ...read more.

The dispute heated up as bosses claimed the 150 new security staff had already signed contracts, but the airport also claimed that the issues could be resolved through normal procedures, without need for industrial action. Transport and General Workers' Union regional spokesman, Dave McCall, however felt the demonstration was relevant to show the airport that it is not a matter to be taken lightly, despite what the company claims. After this report, came the inevitable second chapter to this dispute's saga. A little more than a month later, more strikes were planned by the security staff still disputing over the planned cutbacks by bosses. This certain string of strikes was proposed to take the form of five, hour long stoppages. Airport bosses, however seem unaffected by the strikes, remarking on the part of a spokesperson that passengers have not been affected by the strikes nor have they had an impact on the workings of the airport. Union leaders claim the cuts have sprung from airport bosses striving to increase profit margins and ignoring the security staff's issues generated by the cuts. Dave McCall, making another appearance this time stated that the airport can not rely on employing top quality security officers on the lowly pay they are being offered in the new deals. After the disastrous industrial dispute involving security staff at Manchester airport, you'd think there had been enough action there to last a lifetime. ...read more.

The back and forth overview of the dispute is immediately identified as tedious, a conclusion many of the workers will have adopted, this lowers job satisfaction and overall morale. All of the above industrial disputes, in some way or another, need to be resolved. Negotiation is the most effective method of arriving at an agreement, typically the union representative of that certain company will arrange a meeting with management to discuss the dispute, the exchange of views on the matter will commence, finally resulting with an agreement of some kind. However, this meeting is not always successful and sometimes leads to no change whatsoever. In this case the steps are repeated, in extreme cases where neither side have accepted a decision, industrial action takes place. Sometimes, however ACAS is introduced into the equation, made up of trade union reps, academics and business people, it encourages a settlement that all parties may agree to. Whatever the dispute, whatever the implications, industrial disputes mean hassle to both workers and employers. There always seems to be negative affects during and after the dispute, which is why they are discouraged by both employees and bosses alike, there is never a straight out winner, this is evident in the reviewed industrial disputes mentioned, in my opinion, industrial disputes and eventual action should only occur in extreme cases, in this day and age, irrelevant disputes are regularly displayed in the public eye, we have grown to accept industrial disputes as a formality in the workplace, which is a self inflicted affair. ...read more.