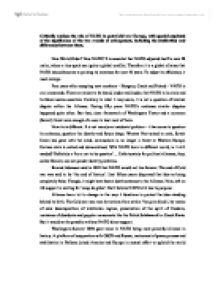 Critically analyse the role of NATO in post-Cold war Europe, with special emphasis of the significance of the two rounds of enlargement, including the similarities and differences between them.

Critically analyse the role of NATO in post-Cold war Europe, with special emphasis of the significance of the two rounds of enlargement, including the similarities and differences between them. New World Order? New NATO? It is essential that NATO adjusted itself to new IR realm, where a tiny spark can ignite a global conflict. Therefore it is a global alliance that NATO should become to prolong its existence for next 50 years. To adjust its efficiency, it must enlarge. Four years after accepting new members - Hungary, Czech and Poland - NATO is on a crossroads. There are voices to be heard, louder and louder, that NATO is in crisis and its future seems uncertain. Contrary to what it may seem, it is not a question of internal dispute within the Alliance. During fifty years NATO's existence similar disputes happened quite often. But then, clear framework of Washington Treaty and a common (Soviet) threat were enough of a cure to heal most of them. Now its is different. It is not merely an incidental problem - it has come to question its existence, question the identity and future shape. Warsaw Pact seized to exist, Soviet Union has gone with the wind, communism is no longer a threat to Western Europe, German state is united and democratised. With NATO born in different world, is it still needed? Definitely a 'be or not to be question'... Unfortunately for political alliances, they, unlike Hamlet, can not ponder identity problems. Konrad Adenauer said in 1965 that NATO would not live forever. The end of Cold war was said to be 'the end of history'. Last fifteen years disproved that idea as being completely false. Though, it might have been a death sentence to the Alliance. Now, left on life support is waiting for 'coup de gr�ce'. But I believe NATO still has its purpose. Alliance has a lot to change in the way it functions to protect the idea standing behind its birth. ...read more.

The essence of the current enlargement debate is over qualifications, with no apparent consensus. Of an original nine candidates, two candidates, Albania and Macedonia, did not receive invitations at Prague. Each of these countries is small, with comparably small militaries potentially capable of specialised functions, such as transport or medical care, for example, but only minimally capable of building forces able to contribute to high-intensity conflict. In the view of some observers, to adhere to the letter of the military qualifications outlined in the 1999 summit communiqu�, requiring new members to contribute to missions from peacekeeping to collective defence would be tantamount to excluding their entry. Many participants in the debate favour different standards that, in their view, reflect the current political situation in Europe, where Russia is no longer a military threat but ethnic conflict, nationalism, and terrorism are a danger. In such circumstances, they contend political stability and a modernised military at least able to contribute to border defence and to peace operations are an appropriate standard. Secretary of State Powell seemed to suggest such a standard in his confirmation hearing when he stressed a need for candidates to modernise their militaries, and to strengthen their democratic structures. An opposing view is that NATO should first clearly define its mission, above all with an agreement on what types of out-of-area threats, such as terrorism, proliferation, or a disruption of the flow of oil, should be met with a possible military response. At that point, enlargement should be considered, with a determination about which prospective members might contribute to the mission. Some observers, also hesitant about enlargement, note that the United States flew over 60 percent of combat missions in the Kosovo conflict. They prefer prospective members that could relieve the U.S. burden. Yet another view is that there is no clear dichotomy between collective defence (high-intensity conflict undertaken in response, for example, to the attacks of September 11, 2001) ...read more.

It is possible that Putin now views a unified front against terrorism, in part due to Moscow's ongoing conflict in Chechnya, as more important than potential divisions with the allies over enlargement. The Duma and much of Russia's military and intelligence bureaucracy remain adamantly opposed to enlargement, which they view as a U.S.-led effort to move a military alliance closer to their territory. Officials from allied states often counter such an argument by underscoring that enlargement's purpose in large part is to ensure stability in Europe, and that the addition of new member states provides stability, and therefore security, to Russia's west. Putin may also view the entry of Estonia and Latvia into NATO (and the EU, in 2004) as a means to protect Russian minorities in those countries, given NATO and EU strictures over the treatment of ethnic minorities.6 George Bush, in his 2001 speech in Warsaw University, spelled out an expansive vision of NATO "from the Baltic to the Black Sea" and made clear that the "zero option" was not an option. His speech strongly suggested that the U.S. is thinking in broad geo-strategic terms, even if Washington has not yet formally decided on which specific candidates should be admitted. Moreover, by specifically mentioning the Baltic region and opposing "false-lines," Bush explicitly rejected the Russian thesis that there was some "red line" which NATO should not cross. This is the underlying logic of NATO's enlargement, to integrate the countries to the east of NATO, former members of the Soviet Union, into the community of shared Western values, and into the Western institutions - of which NATO is the most important - that define and defend those values. As the President Bush observed in Warsaw, "Yalta did not ratify a natural divide, it divided a living civilisation." He made it clear that his goal is to erase the false lines that have divided Europe and to "welcome into Europe's home" every European nation that struggles toward democracy, free markets, and a strong civic culture. ...read more.