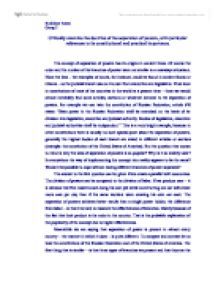 Critically examine the doctrine of the separation of powers, with particular references to its constitutional and practical importance.

Critically examine the doctrine of the separation of powers, with particular references to its constitutional and practical importance. The concept of separation of powers has its origins in ancient times. Of course the order and the number of the branches of power were not similar to a nowadays situations. None the less - the examples of courts, for instance, could be found in ancient Roma or Greece - so the judicial branch was on its own from executive and legislative. If we look in constitutions of most of the countries in the world at a present time - there we would almost inevitably find some articles, sections or whatever devoted to the separation of powers. For example we can take the constitution of Russian Federation, article #10 states: "State power in the Russian Federation shall be exercised on the basis of its division into legislative, executive and judicial authority. ...read more.

The separation of powers achieves better results than a single power holder, the difference from labor - is that it is hard to measure the effectiveness of branches. Mainly because of the fact that their product is the order in the country. That is the probable explanation of the popularity of the concept due to higher effectiveness. Meanwhile we are saying that separation of power is present in almost every country - the manner in which it does - is quite different. To compare and contrast let us take the constitutions of the Russian Federation and of the United States of America. The first thing that is similar - is that three types of branches are present and that they are the same: executive, legislative and judicial. However from that point the differences start to appear. ...read more.

Each constitution provides links between powers. The biggest link is the president of the country. He or she controls all branches; hence constructing such order that all government bodies - representatives of every branch would cooperate, but not operating in different or even opposite directions. Hence the constitutional importance of the concept of separation of powers is also present. As a conclusion it is important to say that it is possible to be sure for almost a hundred per cent that without the idea of separation of powers - the present situation, the society, even the whole world would be very different. And probably the difference would be with negative sign. Violating the separation of powers would cause disorder inside each country, therefore in the relations and foreign policies also. So probably it appears possible to conclude it will not be possible to cope without the concept of separation of powers. Riabichev Anton Group 2 ...read more.