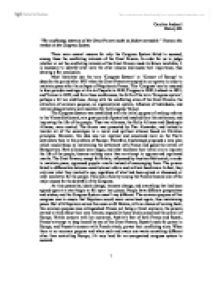 &quot;The conflicting interests of the Great Powers made its failure inevitable.&quot; Discuss this verdict on the Congress System.

"The conflicting interests of the Great Powers made its failure inevitable." Discuss this verdict on the Congress System. There were several reasons for why the Congress System failed to succeed, among these the conflicting interests of the Great Powers. In order for us to judge whether or not the conflicting interests of the Great Powers made its failure inevitable, it is necessary to identify what were the other reasons and assess their importance, thus drawing a fair conclusion. Most historians use the term 'Congress System' or 'Concert of Europe' to describe the period after 1815 when the Great Powers attempted to co-operate in order to maintain peace after the collapse of Napoleonic France. This 'Congress' can be resumed to four periodic meetings: at Aix-la-Chapelle in 1818; Troppau in 1820; Laibach in 1821; and Verona in 1822; and from these conferences, the birth of the term 'Congress system', perhaps a bit too ambitious. Along with the conflicting aims of the Great Powers; the extinction of common purpose, no organizational system, influence of individuals, and internal disagreements were essential for the Congress' failure. The Congress System was established with the initial purpose of making reforms to the Vienna Settlement, as a great period of peace had resulted from this settlement, and improving the life of the people. Thus two alliances, the Holly Alliance and Quadruple Alliance, were created. ...read more.

There was no such thing as a Congress System. Not only because of the conflicting interests of the Great Powers, but also because of the lack of a permanent organization. Without a permanent organization, no material was collected for examination, no agenda was created and no rules were agreed upon; thus making it impossible to achieve and carry out tasks and objectives. For this simple reason one can say that if anything, the Congress System was a mere utopia. The meetings randomly occurred and there was no agreement between the Great Powers as to what the Congresses were for. This proves that with no organizational system and no clear objectives of the Great Powers since the beginning only led to its inevitable failure. Furthermore, the influence of individuals played a very active role on the fall of the Congress System. In 1825, Tsar Alexander of Russia dies and is succeeded by Nicholas I. The new emperor was indifferent to the Quadruple Alliance, for he did not participate in its creation or its activities. Nicholas I also disliked Metternich, leading him to support Greek revolutionaries, thus going against the Troppau Protocol, since he was actually encouraging revolts instead of oppressing them. Simultaneously, Canning was doing anything he could possibly do to make the Congress System fall apart; for he believed the original purpose of this congress was betrayed by the Great Powers in order to fulfill their own interests. ...read more.

France also agrees to the treaty, only Austria and Prussia do not take part, changing the whole nature of the Great Power relations. In Spain, the revolt developed into a civil war. Both France and Russian were willing to intervene and oppress the revolution, but neither Metternich nor Castlereagh were interested. After Castlereagh committed suicide, Canning replaced him, again changing the course of events, since Canning had no interest on the Congress System for he believed in the rule that 'every nation for itself.' Canning did not co-operate on Spain and finally withdrawn from the Congress. Without Britain and without any respect towards their values and interests, the Congress System was reaching its final stage. The term 'Congress System' is vague, and like so many of the 'systems' in history, the congress System is probably an invention of historians. Certainly because it was anything but systematic; there was no agreement between the powers on what the congresses were for; and no common purpose was present whatsoever. None of the alliances or treaties were respected, instead were ignored when the Powers wanted to achieved their personal goals. If nothing, the Congress System only brought more chaos and confusion to Europe, with the exception of Greece; almost revived militant Jacobinism; and proved the selfish character of the Great Powers. Since the beginning the conflicting interests of the Great Powers made its failure inevitable; since the beginning the Congress System was destined to fail. Carolina Andreoli History HL 1 ...read more.