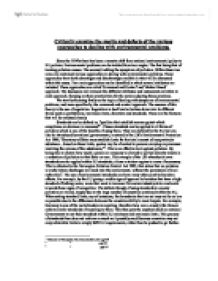 Critically examine the merits and defects of the various approaches to dealing with environmental problems.

Critically examine the merits and defects of the various approaches to dealing with environmental problems. Since the 1970's there has been a massive shift from national environmental policy to EU policies. Environmental problems can be tackled from two angles. The first being that of treating pollution causes. The second, tackling the symptoms of pollution. Within these two areas are contained various approaches to dealing with environmental problems. These approaches have both advantages and disadvantages and this is what will be discussed within this essay. Two main approaches can be identified in which several attributes are included. These approaches are called 'Command and Control' and 'Market Based' approach. The discussion will evaluate the different attributes and instruments available to each approach, focusing on their practicalities for the nation adopting those practices. We start by focusing firstly on the topic of dealing with symptoms of environmental problems, and more specifically, the command and control approach. The essence of this theory is the use of regulation. Regulation in itself can be broken down into its different forms such as prohibitions, maximum limits, directives and standards. These are the features that will be analysed closely. Standards can be defined as, "qualities that establish norms against which compliance or deviance is measured"1. Theses standards can be applied to all forms of pollution which is one of the benefits of using them. They are dictated by the EU but can also be introduced by national governments, as stated in the UK's Environmental Protection Act 1990, "Secretary of State may establish limits for the total amount of any particular substance....based on these limits, quotas may be allocated to persons carrying on processes involving the release of the substances,"2. ...read more.

The directive can be adapted regionally or locally if necessary. This flexibility allows Governments to apply EU rules but to their own extent," directives address Member States and normally oblige them to act in a certain way,"8. The position is that the directives are not demands or prohibitions but rules and guidelines. This can lead to a misinterpretation where expectations of results are not achieved because the Governments may not be fined or individuals are not fined for breaking the directives. There are other defects to using regulations to control pollution problems. One of these defects is that there are very few incentives for companies and individuals to work strictly to regulations, unlike in Sweden where rather that fine companies for polluting, they pay them to not pollute9. There is often little profit to be made for companies to operate environmentally correct, and therefore many companies work to the highest limits that they legally can. The central core of the market based approach is the 'polluter pays principle'. This idea was first stated in the 1973 'EC Action program, and later cemented in the 'European Convention in Civil Responsibility for Damages Resulting from the Exercise of Activities Dangerous to the Environment 1974'. The polluter pays principle has led to a number of tools being used, by national Governments on the whole, to ensure that rather than the public or Government pay, the companies or individuals who do the polluting pay directly financially. One way that this is done is through taxation, "there are various degrees or taxes that can be levied with the aim of affecting behaviour towards the environment,"10. ...read more.

"The establishment of a specific, autonomous set of rules to protect the environment in Western Europe is anything but easy since legal systems are different and the perception of environmental problems varies considerably"16. Has this quotation from 1997 been made less accurate from the introduction of the Euro and the closer integration of the EU as a whole? Fundamentally, no. The developement of EU Environmental Policy and it's impact on EU Member States is increasing, but is still very difficult to implement in most areas, such as waste dumping. The need for an equilibrium between command and control approaches and market based strategies is crucial. Command and control approaches can be thought of as most effective in their overall environmental effectiveness, their administrative cost and EU wide adaptability. Whilst market based approaches can be seen to be best in terms of economic efficiency in terms of cost to non-polluters, and cost effectiveness because their implementation and maintenance costs are lower. With the news in the last few days that the EU is to implement a'polluter pays' legislative bill concerned with recycling17, this idea of an equilibrium of the two approaches can clearly be understood. Within this essay, the merits and defects of the main approaches in tackling environmental problems have been discussed. The instruments and tools available through both EU legislation and national law allow environmental problems to be tackled from two fronts, treating the symptoms of pollution and tackling the causes of pollution. These instruments and tools produce both positive and negative results and it is these results that determine the extent to which the tool should be implemented. ...read more.