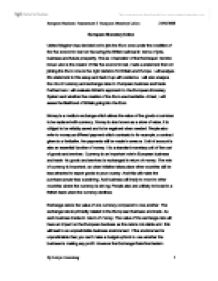 European Monetary Union United Kingdom has decided not to join the Euro zone under the condition of the five economic test not favouring the British national in terms of jobs, business and future prosperity. The ex Chancellor of the Exchequer Gordon brown who is the creator of this five economic test, made a statement that not joining the Euro zone is the right decision for Britain and Europe. I will analyse this statement in this essay and back it up with evidence. I will also analyse the role of currency and exchange rates in European business and trade. Furthermore I will evaluate Britain's approach to the European Monetary System and whether the creation of the Euro was inevitable. At last, I will asses the likelihood of Britain going into the Euro. Money is a medium exchange which allows the value of the goods or services to be replaced with currency. Money is also known as a store of value, it is obliged to be reliably saved and to be regained when needed. People also refer to money as differed payment which contrasts to for example, a contract given to a footballer, the payments will be made in arrears. Unit of account is also an essential function of money. ...read more.

The base rate will be kept low compared to the current British base rate. More people will afford to buy afford to buy a property and loan. The disadvantage of adopting the Euro currency is Britain will lose their history and their national identification. The most important issue is that Britain will lose control of monetary policy to the European central bank. And there is a possibility that the fiscal policy will be next. Britain also won't be able to assist in domestic recession. Britain may also end as 2nd division Europeans, they will be reacting to Euro policy but not having a say in it. Bretton Woods the founder of International Monetary Fund (IMF) established a system of fixed exchange rates during the conference in 1944. The IMF was in charge of making member of states maintain their respective exchange rates. However, countries with high level of inflation found fixed exchange rate system reflecting to poor export performance. As their exports where relatively expensive on the world market. And those countries with low level of inflation found themselves with regular balance of payments surpluses because of their cheap exports. This how Bretton Woods attempted to link the main currencies, which became unsuccessful in 1972. The exchange rates could rise or fall within the predetermined limits, with USA's influence that turned the dollar into a 'snake in tunnel'. ...read more.

Goods and services can be freely moved between European members of states. Removing the trade barriers is what the European Commission complied to. The has also stabilized certainty for the European businesses. The black Wednesday happened on 16 September 1992. The government was forced to remove the pound from The ERM, due to pressure from currency speculators. Which made George Soros made 1 billion dollar. And this costs UK 3.4 billon pounds damage. The adoption of the Euro currency was evitable for the Euro zone as GDP has been growing drastically, compared to the years before the Euro was introduced. It has also been good for the trading, and the Euro currency is at the moment more valuable than the US dollars. I personally think that Britain should adopt the Euro currency to attract business to trade in Britain, which will be beneficial for the British economy. As the member of the Euro states are growing in the economy and GDP per capita wise. If the Britain joins the Euro zone and inflation arises, the ECB can control it by raising the interest rate on the mortgages to take money out of circulation. Britain is terrified to lose both their monetary and fiscal policy to the European Central Bank, these are what is holding the Britain to join the Euro zone. Which they shouldn't be worried of as the member of the Euro zone are performing well. ...read more.