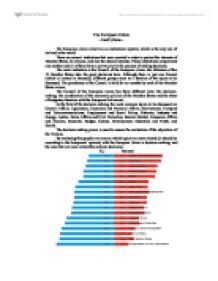 The European Union - Institutions - The European Union is built on an institutional system, which is the only one of its kind in the world. There are several institutions that were created in order to protect the interests of Member States, its citizens, and also the shared interests. These institutions complement one another and all of them have a part to play in the process of making decisions. The main institution is the Council of the European Union: the Ministers of the 15 Member States take the great decisions here. Although there is just one Council (which is located in Brussels), different groups meet as a function of the topics to be discussed. The presidency of the Council is held for six months by each of the Member States in turn. The Council of the European Union has three different roles: the decision-making, the coordination of the economic policies of the Member States and the share of budgetary function with the European Parliament. In the field of the decision-making, the most common topics to be discussed are General Affairs, Agriculture, Economic and Financial Affairs, Environment, Transport and Telecommunications, Employment and Social Policy, Fisheries, Industry and Energy, Justice, Home Affairs and Civil Protection, Internal Market, Consumer Affairs and Tourism, Research, Budget, Culture, Development, Education and Youth, and Health. ...read more.

There are two more main institutions in the EU: the Court of Auditors and the European Commission. This one embodies and upholds the general interest of the Union. The President and Members of the Commission are appointed by the Member States after they have been approved by the European Parliament. It has the right to initiate draft legislation and therefore presents legislative proposals to the Parliament and the Council; as the Union's executive body, it is responsible for implementing the European legislation (directives, regulations, decisions), budget and programmes adopted by Parliament and the Council; It acts as guardian of the Treaties and, together with the Court of Justice, ensures that Community law is properly applied and represents the Union on the international stage and negotiates international agreements. The Commission is the driving force in the Union's institutional system. The Court of Auditors exists to check that all the Union's revenue has been received and all its expenditure incurred 'in a lawful and regular manner' and that the financial management of the EU budget has been sound. Its findings are set out in annual reports, drawn up at the end of each year. ...read more.

Translation Centre for the Bodies of the European Union - EUMC - European Monitoring Centre on r****m and Xenophobia - EAR - European Agency for Reconstruction - EFSA - European Food Safety Authority - EMSA - European Maritime Safety Agency - EASA - European Aviation Safety Agency Conclusion: Relations between the institutions of the EU are based on partnership, cooperation and mutual dependency. Their purpose is to provide effective policies and decision-making within a democracy framework, which scrutinizes and checks the use of executive power. Their concern is to enhance the social, economic and cultural welfare of all citizens and to promote peace and economic development not only in Europe, but also throughout the world. There is also a determination to ensure that the Union does not become remote from its citizens. The EU belongs to its peoples, and so do the institutions which serve it. That's why I'm proud to belong to this system. The fact that the Union is composed by people from many different countries, minimizes the existence of corruption and we know that decisions will be taken just to improve citizens' lives. Jo�o Augusto Matos De Carvalho, n.� 14, 11� A Quinta-feira, 20 de Mar�o de 2003 Escola Secund�ria Alcaides de Faria, 2002-2003 ...read more.