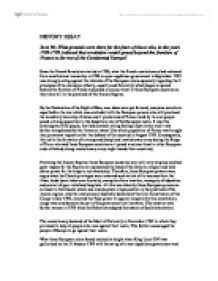 HISTORY ESSAY June 96: What grounds were there for the fears of those who, in the years 1789-1799, believed that revolution would spread beyond the frontiers of France to the rest of the Continental Europe? Since the French Revolution started in 1789, what the French revolutionary had achieved from constitutional monarchy in 1789 to open republican government in September 1792 was strongly acting against the interests of the European rulers especially regarding the 3 principles of the revolution (liberty, equality and fraternity) which began to spread beyond the frontiers of France and posed a serious threat to those European countries as they were still in the practiced of the Ancien Regime. ...read more.

Practicing the Ancien Regime; those European countries were still very religious and had great respect for the Pope as he represented the head of the Catholic religion and held divine power for the kings to rule absolutely. Therefore, those European powers were angry when the Church privileges were removed such as lost of its incomes from the tithes, lands (were taken over by state), exemption from taxation, monopoly of education and control of poor relief and hospitals. All this was taken by those European powers as an insult to the Church which was always given a high position in the practiced of the Ancien regime. ...read more.

European countries such as Britain, Holland, Russia, Spain and Italy reacted to all the above fears by forming a coalition against the revolutionary army. And as for Austria and Prussia; they declared the Declaration of Pillnitz (cause of Louis XVI was the cause of every monarch of France) and Manifesto (Duke of Brunswick declared that if the king was again humiliated similar to the incident of 20 June 1792 then he would carry out military execution and total subversion with the guilty rebels put to the death they deserved), trying to retain the old practiced of Ancien Regime throughout Europe, prevent the spread of the revolutionary principles and protect their countries from invasion of the strong revolutionary army. ...read more.